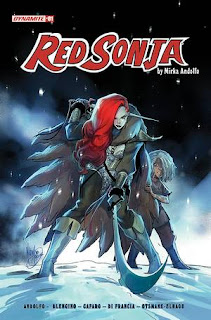 Red Sonja remained a fixture in comic books from then until about 1986.  There have been several ongoing Red Sonja comic book series, and the latest, Red Sonja Volume 6, is under the guidance of popular Italian comic book creator, Mirka Andolfo.  It is written by Andolfo and Luca Blengino; drawn by Giuseppe Cafaro; colored by Chiara Di Francia; and lettered by Hassan Otsmane-Elhaou.

Red Sonja Volume 6 #1 opens in Hyperborea, and its story begins in a village, ransacked and set on fire.  It's residents dead, and the dregs from the forces of “Three-Eyes Shezem,” digs among the ruins for scraps.  Suddenly, the She-Devil with a Sword is upon them.  For she has traveled for two months from Massentia to arrive at this village.

Red Sonja's prize is a particular child, bearing curious white tattoos.  Her name is “Sitha,” and she turns out to be the village's only survivor, but she really does not belong there, according to Zondryck.  He is the one who has sent Sonja to find the child.  Now, Sonja has a travel companion, and their journey to Massentia will bring them across hardened ice, imposing mountains, dangerous forests, and the kind of people that make them dangerous.

The only Mirka Andolfo comic books that I have read are the first two issues of her recent maxi-series, Deep Beyond (Image Comics).  I am happily adding Red Sonja Volume 6 to that.  The story by Andolfo and Luca Blengino is straightforward with lots of Red Sonja-style ultra-violence.  There is, however, a surprising hook in Sonja as she plays something of a mother to a child who is more than she seems.

The art and storytelling by Giuseppe Cafaro flows like water and reflects the mercurial nature of the secrets and back story behind narrative.  Chiara Di Francia's colors also capture the wild and secretive nature of this first chapter, with Hassan Otsmane-Elhaou's lettering providing a steady beat.  I am very surprised by this first issue, and I am interested enough to come back for more.

Posted by Leroy Douresseaux at 9:44 PM