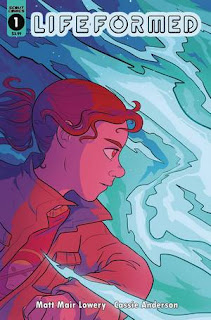 Lifeformed is a new science fiction comic book series from writer Matt Mair Lowery and artist Cassie Anderson.  Lifeformed follows an 11-year-old orphan and the shape-shifting alien she befriends as they travel the countryside in the wake of an alien invasion... and fight back.

Lifeformed #1 introduces Cleo Elward, a typical 11-year-old girl on the verge of teen brat-hood.  Her single-father, Alex Elward, is loving, doting, and involved; the two of them are making the best of life.  Then, suddenly, unbelievably, the sky is filled with strange airships, heralding an alien invasion, and Alex is killed during the first wave of the attack.

Just as suddenly, an alien arrives and approaches Alex Elward's body and then shifts its form so that it resembles Cleo's father.  Aided by this alien shape-shifter, who turns out to be a rebel, Cleo escapes the invasion by traveling the countryside.  It is not long, however, before she must join “alien dad” in fighting the invaders.  Can Cleo work through her grief and find the courage to fight back?

THE LOWDOWN:  Matt Mair Lowery and artist Cassie Anderson have created in Lifeformed one of the best science fiction comic books that I have read over the last decade.  Lifeformed's themes of courage and choice resonate throughout the narrative, and the story ponders the questions of what it means to be human, doing so without being heavy-handed.

Cassie Anderson's illustrations and graphical storytelling are powerfully dramatic, but, at the same time, they are lively and colorful, going down the old gullet of the reader's imagination smoothly.  Anderson's clean drawing style is easy on the eyes, but also depicts the characters' emotions in a varied manner that gives the characters' personalities some depth.  I found myself in love with these characters, and Cleo is even more lovable when she is being annoying and bratty.  That is the joy in reading Lifeformed – loving the heroes and being intrigued by the villains.

Lowery and Anderson offer a comic book that is poignant and full of feeling, with characters whose emotions feel authentic.  However, Lifeformed also has a dark side, especially when dealing with the alien invaders.  This part of the story is brutal and savage and sometimes exists in a world without sentiment.  I am glad that Scout Comics is giving a home to this unique and really good comic book.

THE LOWDOWN:  Readers looking for cool science fiction comic books that will thrill everyone from middle school readers to adults will want Lifeformed.

[This comic book has an 8-page section of back matter, entitled “Lifeformed Process,” which includes script pages and sketches.]

Posted by Leroy Douresseaux at 4:56 PM