Comics Review: "KILLADELPHIA #17" Offers a "Letter to My Son" 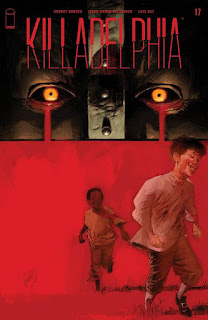 “Home is Where the Hatred Is” Part V: “To Make Man”

As Killadelphia #17 (“To Make Man”) opens, Tevin visits an old friend … for a little blood.  Later, James, Jr. begins the journey that will return him to humanity after being turned into a vampire.  To do so, however, James will have to confront the dark legacy of abuse that gets passed down from father to son.  In this case, James, Sr.'s legacy represents both.  Plus, a we get a first look at the “Dark Realm,” with some help from Anansi.

Meanwhile, Thomas Jefferson makes a move at being a “vampire king.”  So what does the “vampire queen” have to say about that?

THE LOWDOWN:  Killadelphia is now in the penultimate chapter of its third story arc, “Home is Where the Hatred Is.”  This may be the story arc that most reveals the complexities and multiple layers of Killadelphia, making it more dark fantasy than mere vampire comic book.

Writer Rodney Barnes offers a chapter that is a bit more philosophical than usual.  It is surprising, especially considering that he is preparing the readers for some red, hot-blooded Armageddon.  It can be a surprise, to both characters and readers, when the revelation comes that everything is worse than thought.  On the other hand, it is good that we see more complexity in Tevin Thompkins; he is a most human vampire, and I hope he gets his own something – graphic novel, miniseries, one-shot, etc.

Artist Jason Shawn Alexander and colorist Luis Nct are always ready to draw and color the delights and eccentricities in Barnes' scripts.  There is an odd balance of surreal, especially in the place where Jim, Jr. must find himself, and artists' suggestions and presentations of the “Dark Realm” are creepy.  The other part of that balance is the fire they light back in Philadelphia, conveying through the story that it is about to go down.

I am still impressed that Barnes and Alexander are able to make each issue of Killadelphia unique  It blows my mind, and I implore you, dear readers, to drink fully of this cup of red.

Posted by Leroy Douresseaux at 1:35 PM