Review: Jackie Chan Really Rumbles in "RUMBLE IN THE BRONX" 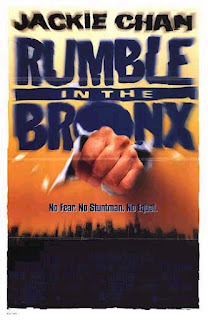 [Destin Daniel Cretton, the director of Marvel Studios' “Shang-Chi and the Legend of Ten Rings,” has said in interviews that the films of Jackie Chan heavily influenced his Marvel film.  I decided to go back and take a new look at the first Jackie Chan film I saw, “Rumble in the Bronx.”]

Rumble in the Bronx is a 1995 Hong Kong martial arts film starring Jackie Chan and directed by Stanley Tong.  Both Chan and Tong directed the film's action choreography.  Rumble in the Bronx was released in Hong Kong in 1995.  New Line Cinema released an English-dub version of the film with a shorter run time than the original version in February 1996.  The film also introduced Jackie Chan to a mainstream audience in the United States.  Rumble in the Bronx focuses on a young man from Hong Kong who uses his martial arts skills to take on a street gang and murderous mobsters while visiting his uncle in New York City.

Keung (Jackie Chan) comes to New York City to attend the wedding of his Uncle Bill (Bill Tung) to his bride-to-be, Whitney (Carrie Cain-Sparks).  Uncle Bill, who lives in the Bronx, is also about to sell his grocery store, “the Wah-Ha Supermarket.”  Keung meets Elena (Anita Mui), the woman who is buying the supermarket, and he ends up agreeing to stay in the U.S. a little longer to help Elena with the transition of ownership

What Keung does not know is that his uncle's store and this Bronx neighborhood is plagued by a street biker street gang led by a man named Tony (Marc Akerstream).  Keung thwarts the gang members the first time he meets them, but he also meets a Danny Chan (Morgan Lam), a disabled Chinese-American boy whose sister, Nancy (Francois Yip), is a member of the gang.  Keung attempts to help Danny and Nancy, while in constant battle with Tony and his crew.  However, neither Keung or Tony know that they are about to become entangled with a vicious crime lord, White Tiger (Kris Lord).

I had heard of Jackie Chan by reputation long before I had a chance to see Rumble in the Bronx.  Prior to the release of that film in 1996, Chan was an international movie star, but only had a cult following in the U.S.  I do remember that a friend of mine at the time was a huge Jackie Chan fan and went out of her way to see his films.  Also, the fact that Rumble in the Bronx was set in New York City, but was actually shot in and around Vancouver, British Columbia, Canada fascinated some commentators.

The truth about most Jackie Chan films is that they are not about the plot, but are an excuse to show the amazing martial arts, acrobatic, gymnastic, and stunt skills of Jackie Chan.  Chan is an amazing performer and a charismatic movie star, even when speaking in what is not his first language, English.

At the time of the U.S. theatrical release of Rumble in the Bronx, I read an article that said that Chan had been seriously injured while performing his own stunts over forty times.  For much of his career, Chan has done most of his own stunts, and Rumble in the Bronx shows Chan in all his glory.  Watching it, I saw many instances in which he did things that could and should have killed him.  But Chan is like a real-life superhero, getting up every time he is knocked down.  Once I started watching Rumble in the Bronx this most recent time, I had a hard time stopping for anything.  Chan moves so fast that it makes the film seem to be shorter than it actually is.

Rumble in the Bronx is also a bit odd beyond Chan's act.  The film is surprisingly humorous, making it a delightful action-comedy, but it is also unexpectedly violent, including depicting a brutal kind of murder that one would not expect in this film, considering its humorous slant.  However, Rumble in the Bronx also includes one of my favorite Jackie Chan stunts, the scamper through the grocery cart.

Posted by Leroy Douresseaux at 3:56 PM