Review: "SHANG-CHI and the Legend of the Ten Rings" Rings My Bell 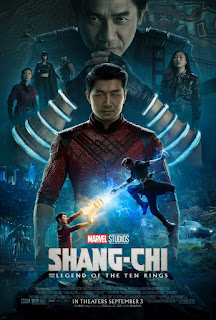 Shang-Chi and the Legend of the Ten Rings is a 2021 superhero film directed by Destin Daniel Cretton and produced by Marvel Studios and Walt Disney Studios Motion Pictures.  It is the 25th film in the Marvel Cinematic Universe (MCU) series.  The film is based on the Marvel Comics character, Shang-Chi, Master of Kung-Fu, that was created by Steve Englehart and Jim Starlin and first appeared in the comic book, Special Marvel Edition #15 (cover dated: December 1973).  Shang-Chi and the Legend of the Ten Rings focuses on a young martial artist who is forced to confront his past and his father's deadly criminal legacy.

Shang-Chi and the Legend of the Ten Rings (or simply Shang-Chi) opens one thousand years ago and focuses on Xu Wenwu (Tony Leung), a warlord who found the “Ten Rings,” mystical weapons that grant their user immortality and great power.  Wenwu establishes a secret society of warriors called the “Ten Rings,” and begins to conquer the world.  In 1996, while searching for a legendary village, “Ta Lo,” Wenwu meets the village's guardian, Jiang Li (Fala Chen).  The two battle, but eventually fall in love and have two children, a boy named Xu Shang-Chi and girl named Xu Xialing.

Decades later, Shang-Chi (Simu Liu) has adopted the name “Shaun” and is living in San Francisco.  Along with his long time best friend, Katy (Awkwafina), he works as a valet at a fancy hotel.  One day, while taking the city bus, Shang-Chi and Katy are attacked by a Ten Rings squad led by the assassin, “Razor Fist” (Florian Munteanu), who wants to steal a pendant given to Shang-Chi by his mother.  Fearing that the Ten Rings are going to steal a second identical pendant given to his sister, Xialing (Meng'er Zhang), Shang-Chi decides to track her down.  Waiting for him, however, is a conspiracy that will inadvertently free a great evil known as the “Dweller-in-Darkness.”  To stop that, Shang-Chi will finally have to confront his past and grasp his destiny.

If I am honest, I will admit that I love martial arts fighting scenes in television and especially in movies.  I prefer fighting as performed by Asian or Asian-American actors.  Shang-Chi and the Legend of the Ten Rings gives me both, and the fight scenes are spectacular, so much so that they movie could never give me enough to satisfy me.  The general choreography of the action scenes is quite good, as seen in the bus-battle sequence, and it is clear that Shang-Chi's fighting style and techniques are influenced by the martial arts films of legendary Chinese actor/stuntman, Jackie Chan.

With flashy visual effects, Shang-Chi and the Legend of the Ten Rings also explores Asian culture, offering nice peeks into both family dynamics and Chinese culture and myths.  In a way, Shang-Chi is a movie that blends a story of family with an an exploration of a fantasy world that is similar to the one in Disney's recent animated film, Raya and the Last Dragon.  This immersion in a different world and culture allows Shang-Chi to set itself far apart, the way Black Panther stood out from other Marvel Studios films.

Shang-Chi also offers the combination of the prodigal son and the gifted-kid motif that both Raya and other Marvel films (like Iron Man and Black Panther) offer.  In that role, Simu Liu is versatile as Shang-Chi, an incredibly talented fighter who is also a happy-go-luck every man.  I found Liu's Shang-Chi likable from the first moment I saw him on film.  Tony Leung is an intense, dramatic heavy as Shang-Chi's shady father, Xu Wenwu; it's a gritty, edgy performance that Shang-Chi and the Legend of the Ten Rings needs in order to keep the story from flying away in its flights of fancy.

I do think that Marvel tries a little too hard to convince us that Shang-Chi and the Legend of the Ten Rings is part of the larger Marvel Cinematic Universe.  We got that with the appearance of Wong (Benedict Wong), a character that appeared in Doctor Strange (2016), but an end credits scene is ready to pound it into our heads, as if we never had a clue.  The film, especially its flashbacks and in its quiet moments, sometimes falls flat.  That keeps it from being the kind of next-level Marvel film, that Black Panther and the better Avengers and Captain America films are.

Still, Shang-Chi and the Legend of the Ten Rings is an exceptional film, both in its story and in what it represents.  Shang-Chi is Marvel Studios' first film with an Asian director and a predominantly Asian cast, and it shows those distinctions with pride, while being wonderful and entertaining.