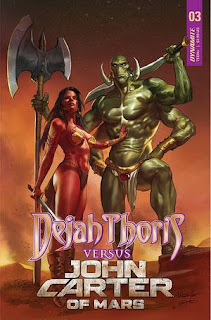 As Dejah Thoris Versus John Carter #3 opens, Dejah Thoris, Queen of Helium, is a prisoner of Rotak Gall in Dar Shadeth, a ruined palace from ancient days that is also far from civilization.  However, where she is in Dar Shadeth is “outside of the present” because of Gall's use of “arcanotech.”  Dejah will learn that “The Longborn” have new plans for her, and Gall is activating those plans.

Meanwhile, John Carter fights through Gall's “Black Pirate Synthetics,” hacking and slashing to find Dejah so that he can rescue her.  But what is John's part in Gall and The Longborn's plans?

THE LOWDOWN:  Dynamite Entertainment's marketing department recently began providing me with PDF review copies of some of their titles.  One of them is Dejah Thoris Versus John Carter #3, the third issue of the series that I have read and only the third Dejah Thoris or John Carter comic book I have read.

I found the first two issues of Dejah Thoris Versus John Carter to be likable, although I thought the second issue was stronger.  I enjoyed this third issue so much that I wish I could read more of the series right this very moment.  The art by Alessandro Miracolo still reminds me of the kind of art that readers would find in a Flash Gordon comic book, and that is appropriate.  Miracolo's art and Dearbhla Kelly colors sell the idea that this story takes place on a faraway world full of action, adventure, aliens, monster, hybrids, and ancient gods.  This is pure, lovable primordial science fiction and fantasy.

Writer Dan Abnett, a veteran comic book scribe, kicks the story into the next gear once again.  With each issue, Abnett raises the stakes, and this third issue offers a shocking and frightening vision of the immediate future for Dejah and John.  Dejah Thoris Versus John Carter is a thoroughly enjoyable read, and this third issue suggests that the fourth might be even more exciting.