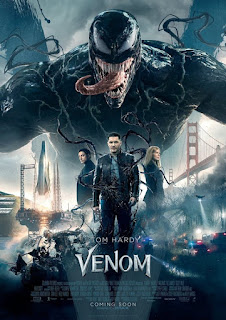 Venom is a 2018 superhero fantasy-action film directed by Ruben Fleischer.  The film is based on the Marvel Comics super-villain/anti-hero characters, Eddie Brock/Venom, to which several comic book writers, artists, and editors contributed in the creation of, most especially artist Todd McFarlane and writer David Michelinie.  It is also the first film in the “Sony Pictures Universe of Marvel Characters” series.  In Venom the film, a troubled television reporter gains superpowers after bonding with an alien entity that is part of an invasion force.

As Venom opens, a space exploration probe belonging to the bio-engineering corporation, Life Foundation, discovers a comet covered in strange lifeforms.  The probe returns to Earth with four samples of these lifeforms, but one escapes.  Later, Life Foundation CEO, Carlton Drake (Riz Ahmed), has realized that these lifeforms are “symbiotes,” and that they cannot survive without human hosts.  However, soon after the symbiotes bond with humans, the humans' bodies start to reject the aliens.  Drake is obsessed with finding the perfect human hosts for these symbiotes, even if his experiments lead to the deaths of many humans.

Six months later, Eddie Brock (Tom Hardy) is a failed television reporter and former star of “The Brock Report.”  He previously had a run-in with Drake, but fate has given him the opportunity to infiltrate the Life Foundation.  That is how Eddie has an unfortunate encounter with a symbiote that calls itself “Venom.”  Eddie struggles to adapt to what he calls the “parasite” inside his body and is shocked to learn that there are millions more like Venom out in space.  But Eddie will need Venom's help to stay alive when Drake and Life Foundation discover his strange union and come after him to retrieve their property – the symbiote Venom.

Except for his early comic book appearances, I have never been a fan of Venom, but I am a fan of Venom the movie.  He is one of those characters whose potential reveals itself in the movement that television and film offers.  The visual-effects crew of Venom does excellent work in creating Venom as a fascinating and alluring CGI character; noisy, chaotic, obnoxious, inconsistent, and aggressive work for this character.  In fact, there are many inconsistencies in what is supposed to be the nature of human-symbiote relationship, especially in what are the rules of Eddie Brock and Venom's merger, but I found this movie to be too much fun for me to pay attention to logic.

Tom Hardy as Eddie Brock and Riz Ahmed as Carlton Drake make the most of two characters that are not that well developed, and the characters make a good adversarial pair.  Even acclaimed actress and multiple Oscar nominee, Michelle Williams, manages to make Eddie's ex, Anne Weying, seem like something more than an obligatory female character.  But still, the gold in Venom is the special effect that is Venom the character.  I like Venom enough to watch a sequel...

Posted by Leroy Douresseaux at 4:21 AM