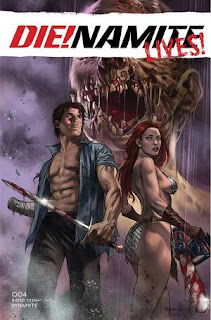 DIE!namite is a series of zombie apocalypse comics from Dynamite Entertainment that utilizes some of the publisher's most popular characters and licensed properties.  The latest is DIE!namite Lives!  It is written by Fred Van Lente; drawn by Vincenzo Carratu; colored by Kike J. Diaz; and lettered by Hassan Otsmane-Elhaou.  In the new series, Vampirella and the remainder of Project Superheroes look for a new savior, and that could be Ash Williams (star of the 1992 film, Army of Darkness).

DIE!namite Lives! Volume 2 #4 opens at “Battle Base” in the Pacific Northwest.  Brigadier General Garth “Battle” Fields has had his fill with Captain Future, who has practically taken over Field's base.  Future is obsessed with Evil Sonja.  If he can figure out how she controls the “Super-Zombies,” he believes that he can weaponize them towards his plans of global domination.  However, Sonja has her own plans for ending things.

Meanwhile, at a local “S-Mart” warehouse,  Ash fights off someone who really wants that copy of the  “Necronomincon Ex Mortis.”  But it was Pantha who bought it online.

THE LOWDOWN:  Dynamite Entertainment's marketing department recently began providing me with PDF review copies of some of their titles.  One of them is DIE!namite Lives! Volume 2 #4, which is the second issue of this series that I have read.  In fact, this is only the second DIE!namite comic that I have read, although I've known of the series since it first began.

What can I say?  DIE!namite Lives! Volume 2 #4 is fun, which is the same thing I said about the third issue.  However, it was easier for me to get into the story this time.  Fred Van Lente pours a whole lotta lighter fuel into the heat of the Captain Future-Evil Sonja-Gen. Fields dynamic.  That is the best part of the issue, and sets up what could be some crazy fun for the final issue.

I READS YOU RECOMMENDS:  Fans of DIE!namite will want DIE!namite Lives! Volume 2.