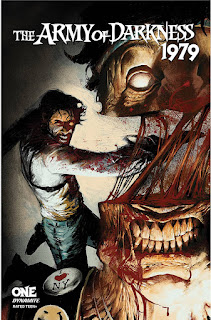 The most recent Army of Darkness comic book in the Dynamite catalog is The Army of Darkness 1979.  It is written by Rodney Barnes; drawn by Tom Garcia; colored by Dinei Ribero; and lettered by Troy Peteri.  In the new series, Ash Williams finds himself fighting his usual adversaries, the Deadites and the Necronomicon, in the late 1970s.

The Army of Darkness 1979 Volume 1 #1 opens in the South Bronx, circa late 1970s.  Several gangs, including The Half Deads, The Dominos, The Vikings, and The Mechanics, have called a truce in order to gather for a meeting.  Ace of the Dominos has a grand plan, and it is that the gangs should consolidate their numbers in order to rule the streets of New York City.  However, there is a new gang, “The Warlocks,” and they've decided that they can rule these streets by themselves.

Meanwhile, in Washington State, 2021:  Ash Williams is starting a new life in the hopes that he can retire and settle down – no more Necronomicon and no more Deadites.  One suddenly-appearing time portal, and Ash finds his ass in New York... circa 1970s.

THE LOWDOWN:  Dynamite Entertainment's marketing department recently began providing me with PDF review copies of some of their titles.  One of them is The Army of Darkness 1979 Volume 1 #1, which is the first Army of Darkness comic book I have read since I read the Dark Horse series decades ago.

I am a fan of The Army of Darkness 1979 Volume 1 writer, Rodney Barnes, because of his 2017-18 Falcon comic book for Marvel, where he also produced a Star Wars comic book, Lando, about the early years of everyone's favorite casino/star hustler, Lando Calrissian.  Of course, I am only one of a growing legion of devotees of Barnes' apocalyptic vampire comic book series, Killadelphia (Image Comics), which he produces with artist Jason Shawn Alexander, who is also the lead cover artist on The Army of Darkness 1979 Volume 1.

The Army of Darkness 1979 Volume 1 #1 is an intriguing first issue simply for the fact that Barnes introduces a bad ass group of villains, the Warlocks.  Anytime, a writer can introduce evil into the world of  Army of Darkness, evil that is as fearsome as the Necronomicon and the Deadites, readers are in for some Ash-kicking fun.

Artist Tom Garcia's illustrations are wild and unkempt, which serves the innate craziness of Ash and Army of Darkness.  Dinei Ribero's trippy colors give the Deadites a maniacally homicidal glow that is perfect … for them, of course.  So I'm interested to see where the creative team is taking us as well follow a man with a chainsaw for his right hand.

Posted by Leroy Douresseaux at 5:31 PM