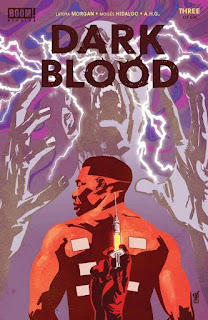 Dark Blood is a new six-issue comic book miniseries created and written by screenwriter LaToya Morgan (AMC’s “The Walking Dead,” “Into The Badlands”).  Published by BOOM! Studios, the series is drawn by Walt Barna and Moisés Hidalgo; colored by A.H.G.; and lettered by Andworld Design.  The series focuses on a Black World War II veteran who discovers that he has strange new abilities.

Dark Blood #3 opens in 1945, ten years before the Variance.  In Alabama, Emma Aldridge, Avery's wife, feels the penetrating eyes of a member of the local wolf pack, also known as a police officer, specifically Officer Wright.  Meanwhile, near the Austrian border, Avery and a fellow pilot race for safety with another kind of wolf pack, in the form of a Nazi commandant and his soldiers, nipping at their heels.

Ten years later, back in the present, it is the “Night of the Variance.”  Once again, Emma evades a wolf, while Avery runs away from one.  As he did a decade before, Avery will once again have to decide when he should stop running and turn around and start fighting.

THE LOWDOWN:  The indignities that Avery Aldridge suffers in Dark Blood #2 are familiar to me because I have experienced some of them and others were told to me via first hand or second hand accounts.  A theme that runs throughout Dark Blood, thus far, is the notion that Black people are often being hunted.  Sometimes, even being watched is a form of being hunted; the difference is that the hunter hunts with his stare or gaze.

Television writer-producer LaToya Morgan (AMC's “TURN: Washington's Spies”) offers in Dark Blood a comic book that flows through multiple genres, including science fiction and fantasy, horror, history, and reality-based drama, to name a few.  As a television writer, she knows how to deliver action, suspense, and thrills along with the character drama.  And Dark Blood #3 offers the thrill of the hunt.

This third issue finds husband and wife, Avery and Emma Aldridge, living and surviving on the razor's edge more than once, over two time periods.  It would not be inappropriate to compare this issue's hunters, Alabama law enforcement and Nazi military personnel to one another.  After all, one was the teacher of codified racism, and the other was the student.  [I'll let you, dear readers, figure out which was which.]

Morgan delivers Dark Blood's most taut thrills and fraught drama, thus far, and this time she has a different artist as her creative partner.  Moisés Hidalgo, who drew a few pages of Dark Blood #2, returns to draw Dark Blood #3's dark nights of pursuit to life.  Hidalgo's compositions seem inspired by the surreal madness of Steve Ditko's comics and also the impressionism and and wild-eyed emotions of Japanese manga.  Here, Hidalgo makes the reader feel, as if he refuses to allow the reader to experience Morgan's story only in a rational way.  His art wants us to be fearful, desperate, and even irrational.  While reading this issue, I believed that I had to feel this story if I was really going to have a chance of understanding the characters' plights.

Once again, I must praise A.H.G.'s coloring for Dark Blood.  I read comiXology's digital editions of Dark Blood when I am reviewing the series, and A.H.G.'s colors look gorgeous in this format.  The coloring makes Dark Blood's interiors look like pages from a vintage comic book, so Dark Blood seems to be not a comic book about the past, but a comic book from the past.  It is like a memento from a time capsule, a story that has been waiting for us.

Strangely, Dark Blood #3 confirms what I have been thinking since I started reading this series.  Dark Blood is the comic book that some comic book readers need and have needed for a long time, though some may only discover this later via a Dark Blood trade paperback.  So, once gain, I highly recommend Dark Blood.