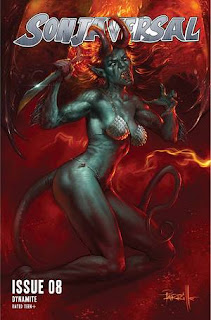 Red Sonja remained a fixture in comic books from then until about 1986.  In 2005, Dynamite Entertainment began publishing comic books featuring differing versions of the character.  One of those is a spin-off title, Sonjaversal, which sees Red Sonja battle parallel versions of herself from parallel universes.  Sonjaversal is currently written by Christopher Hastings; drawn by Pasquale Qualano; colored by Kike J. Diaz; and lettered by Hassan Otsmane-Elhaou.

Sonjaversal #8 opens in the far reaches of space aboard a space ship called “The Ark,” which carries that last of the nearly extinct human species.  Giant monsters from Hell attacked Earth, but no matter how powerful they were, Purple Sonja turned them back … until the day came when she couldn't.

Now, in this far-flung future, Purple Sonja and her mech, S.O.N.J.A., act as scouts for a space pilgrimage for the remaining members of humanity that have fled Earth and are looking for a new home.  However, the kaiju from Hell have returned, and they have grown bigger without the gravity of Earth to hold them down.  The radiation of space has also made them meaner, but Purple Sonja and S.O.N.J.A. are up to the task.  Sonja's task is about to get harder after she gets a visit from an old enemy, Hell Sonja!

THE LOWDOWN:   Dynamite Entertainment's marketing department recently began providing me with PDF review copies of some of their titles.  One of them is Sonjaversal #8, which is the third issue of the title that I have read.

Sonjaversal #8 is also my favorite issue of the series … so far.  I enjoyed the sixth issue of Sonjaversal; then, I also found myself really liking Sonjaversal #7.  Writer Christopher Hastings has a knack for delineating the adventures of these parallel Sonjas, whether they are supernatural detectives, vampire hunters, or mech warriors.  His scripts are interesting and quite entertaining.

The art team of illustrator Pasquale Qualano and colorist Kike J. Diaz make this issue fly.  Qualano turns in some really good anime-inspired art, and Diaz's coloring is a purple and purple-hued sci-fi and fantasy wonderland.

I am recommending Sonjaversal #8 and the series, in general, to you, dear readers.

Posted by Leroy Douresseaux at 4:51 PM