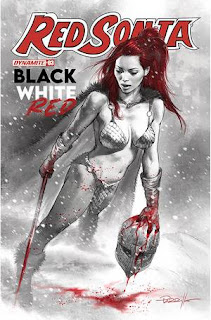 Red Sonja remained a fixture in comic books from then until about 1986.  In 2005, Dynamite Entertainment began publishing comic books featuring differing versions of the character.  One of those is Red Sonja Black White and Red, an anthology comic book featuring stories from well known comic book writers and artists, with the art presented in black, white, and red.

THE LOWDOWN:   Dynamite Entertainment's marketing department recently began providing me with PDF review copies of some of their titles.  One of them is Red Sonja Black White and Red #3, which is the second issue of the title that I have read.

“Dawn of a Crimson Day” by Gail Simone, Walter Geovani, Dearbhla Kelly, and Hassan Otsmane-Elhaou:
Except for two panels near the end of the story, “Dawn of a Crimson Day” is a pantomime comic that offers up an origin story for Red Sonja.  Gail Simone's script is intense and angry, and I could feel some of it tapping at my heart.  The art by Walter Geovani surges and flows like a rushing stream, and Dearbhla's beautiful colors are fiery and lights this story so that even those far away can see it.

“Small Tales” by Dearbhla Kelly and Soo Lee with Hassan Otsmane-Elhaou:
“Small Tales” opens in Hyrkania where Red Sonja encounters a girl named Rua, who happens to be the She-Devil with a Sword's biggest fan.  Now, Red Sonja has to teach the girl how to be a hero.

“Small Tales” is a good story with a nice point about the life of hero.  Soo Lee's art expertly captures the runaway imagination of a fan about her champion.

“Ssshhhhh!” by Jonathan Lau, Hassan Otsmane-Elhaou, and Dearbhla Kelly:
This story finds Red Sonja attempting to claim a bounty by slaying a dragon, but things are not what they seem.  “Ssshhhhh!” is a confusing story with nice art, and while it is filled with visually striking moments, this mostly pantomime story does not interest me.

It is not hard for me to pick a favorite story of the three offered in Red Sonja Black White and Red #3.  The Gail Simone, Walter Geovani, Dearbhla Kelly, and Hassan Otsmane-Elhaou project called “Dawn of a Crimson Day” really stands out in this issue.

Posted by Leroy Douresseaux at 5:49 PM