Review: "Toy Story 4" is Very Good, But Not Great 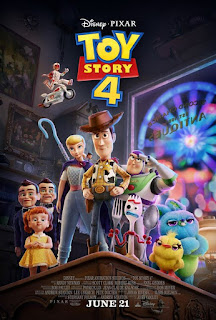 Toy Story 4 is a 2019 computer-animated feature film from Pixar Animation Studios.  It is the fourth film in the Toy Story franchise.  The new film focuses on a new toy and a road trip that will change the life of a beloved toy.

Toy Story 4 opens nine years earlier when Woody (Tom Hanks) and the gang were still Andy's toys.  Woods leads the successful rescue of a toy car, R.C.   In the present, Woody and the other toys are happy in their new life as the toys of a little girl named Bonnie (Madeleine McGraw).  Bonnie is about to enter kindergarten and is distressed about going to school.  Woody sneaks into Bonnie's backpack and joins her on her first day of school.  Woody's action even lead to Bonnie using discarded arts and crafts supplies to transform a “spork” (spoon-fork) into a new toy she names “Forky” (Tony Hale).  Although Forky becomes Bonnie's favorite toy, the spork does not believe that he is a toy, and he is always trying to return to a trash can.

Bonnie and her mom (Lori Alan) and dad (Jay Hernandez) go on an RV road trip, and Bonnie takes Forky, Woody and company with her.  Instead of enjoying the trip, Woody spends his time trying to rescue Forky.  This misadventure leads Woody to an antique story, Second Chance Antiques, and also to a fairground/playground, where he is reunited with old friends and makes new friends.  And Woody learns just how big the world can be for a toy with an open mind.

Toy Story 4 is a good movie, not as good as Toy Story, Toy Story 2, and Toy Story 3, but quite good.  Keegan-Michael Key as Ducky and Jordan Peele as Bunny are nice additions to the cast.  Keanu Reeves is a surprise and gives a surprising voice performance as Duke Kaboom, the Canadian daredevil toy.  The sycophantic ventriloquist's dummies, “the Bensons,” are a nice, creepy distraction.  Christina Hendricks is appropriately pathetic and menacing as the tragically desperate doll, Gabby Gabby.

But Toy Story 4 is, more than the first three films, a movie about adult issues and regrets that tries to be a family movie, if not an outright kids' movie.  More than anything, Toy Story 4 is Woody's movie.  [In this film, Tim Allen's Buzz Lightyear is a supporting character and not a co-lead].  In this movie, Tom Hanks gives one of the best voice performances for an animated film that I have had the pleasure of enjoying.  In Hanks' performance, you can feel it.  Woody is like a father who “lost” one child, Andy (because he grew up and gave away his toys), so he is an obsessive “helicopter parent” about the new child, Molly, who does not need Woody as much as he thinks she does – if at all.

Yes, each Toy Story film has its Mission: Impossible-like operation in which our beloved toys try to save another toy or toys, my favorite being the race to save Woody from an unscrupulous toy dealer and a devious toy in Toy Story 2.  In Toy Story 4, the new “toy,” Forky, needs to be saved, and Woody keeps endangering first, himself, and then, others in increasingly desperate and dangerous bids to save the spork.

Ultimately, however, this movie feels like the franchise has come back one too many times.  The end of Toy Story 3, in which a grown-up Andy gave his beloved Woody and the other toys to Molly, was really meant to be the happily ever after.  Once Toy Story 3 grossed over a billion dollars in worldwide box office, it seemed like common-moneymaking-sense to make a fourth film.  Don't make another Toy Story film, Disney.  Let Toy Story 4 be a very good, but not great coda to the series.

Posted by Leroy Douresseaux at 9:40 AM