"She Wolf" Contends to Howl at Image Comics 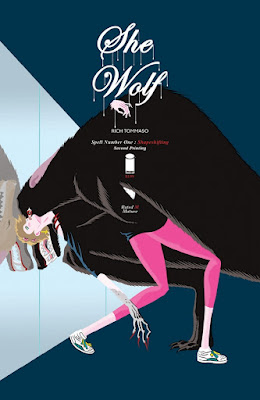 SHE WOLF THE PERFECT READ FOR THE DOG DAYS OF SUMMER

Fans can’t get enough of the hot new werewolf series, SHE WOLF by Rich Tomasso (DARK CORRIDOR). Image Comics is pleased to announce that the critically-acclaimed SHE WOLF #1 will be rushed back to print in order to keep up with the increasing customer demand.

SHE WOLF is a surreal exploration in horror as the story follows a teenage girl who believes she’s been bitten by a savage werewolf. Soon after she begins to experience feverish nightmares that seamlessly bleed into her everyday reality.

Select praise for SHE WOLF:

“A fever dream of a werewolf story where the real monster may be the main character's mind.” —HorrorTalk

“With a surreal and bizarre tone and a compelling character, She Wolf #1 uses its stripped-down debut issue to hook you with its weird and unsettling take on the werewolf story.” —Capeless Crusader

“The simple, soft art and interesting, surreal story are what make She Wolf a great comic, even after just one issue.” —Comicverse