"The Fix" is in at Image Comics 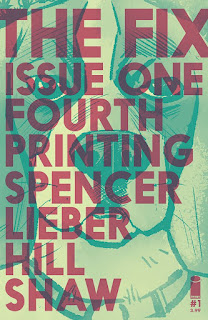 THE FIX SET FOR A SLEW OF PRINTINGS

If this keeps up, retailers are set for slew of press releases about said printings

Are there really still respectable comic book fans out there not reading THE FIX? How is that possible? This series is brought to you by creative superteam Nick Spencer and Steve Lieber and will have readers rolling on the floor in fits of laughter from page one. In order to keep the chuckles flowing, Image Comics will be sending THE FIX #1, THE FIX #2, and even the THE FIX #3, which just hit stores today, back to print. Retailer PSA! It is time to increase your orders in favor of keeping pace with the growing customer interest in the series.

If you’re still not convinced, THE FIX is a story of the crooked cops, scheming mobsters, and corrupt politicians that run things—and the sex toy that can bring them all down. Oh, and the hero is a drug-sniffing beagle named Pretzels. Bad people do bad things to each other in this frenetic, outrageous, sometimes off-putting new caper.

In THE FIX #2, Mac is injured in the line of duty and Roy seeks the help of another detective with a tough case.

In THE FIX #3, Roy moonlights as private security for a superstar actress. Who is Roy? Who is this superstar actress? These are questions that you wouldn’t have if you were just reading this series consistently. Get on the bandwagon and add THE FIX to your pull-list already!

Posted by Leroy Douresseaux at 7:13 PM