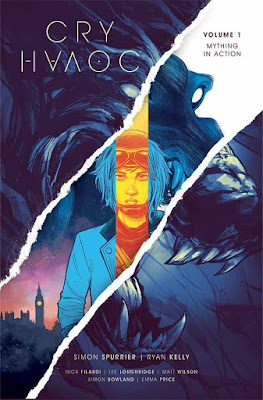 LET SLIP THE WEREWOLVES OF WAR IN CRY HAVOC, VOLUME 1: MYTHING IN ACTION

Collects the first arc into trade paperback this August

Meet Lou: a street musician savaged by a supernatural terror.

Meet Lou: a civilian crossing war-torn Afghanistan with a unit of shapeshifting soldiers.

Meet Lou: a monstress held captive by the rogue beast she was sent to kill.

CRY HAVOC interweaves three stages of a remarkable life into a critically-exalted saga of military, myth, and mania, including an unprecedented use of multiple colorists (Matt Wilson, Lee Loughridge, & Nick Filardi) to define the story's threads.

“An electrifying account of black ops, black dogs and weaponised folklore that is unlike anything you’ve ever seen. Best in show.” —Alan Moore

“CRY HAVOC is flawless. It sinks its teeth into you and won’t let go. Graceful, elegant, visceral and fierce, it runs the gamut. If there’s any justice in the world this will be another huge hit for Image Comics.” —The Nerdist

“CRY HAVOC arrives like Christmas, reads like candy, and lingers like a concussion. One of the most thrilling and surprising books I’ve read in ages.” —Gail Simone

Posted by Leroy Douresseaux at 7:54 PM