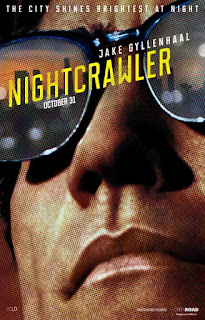 Nightcrawler is a 2014 neo-Noir drama and crime-thriller from writer-director Dan Gilroy.  Starring Jake Gyllenhaal, the film focuses on a Los Angeles man who enters the world of freelance video journalism and then begins to manipulate events in order to create more lurid stories.

Nightcrawler opens in Los Angeles.  It introduces Louis “Lou” Bloom (Jake Gyllenhaal), a thief always looking to convert his stolen merchandise into quick cash.  One night, Bloom is driving back to his apartment when he comes across the scene of a car crash.  He pulls over to witness the chaos, but most of his attention is taken by the “Stringers,” freelance cameramen who are filming live footage of the crash scene with the intent of selling that video footage to local television news stations.

Fascinated and inspired, Bloom buys his first camcorder and a police radio scanner and begins driving the streets of L.A. at night.  He looks for accidents, emergencies, and crime scenes that he can film.  He makes his first sale to KWLA, a bottom-rung television station, where he catches the notice of the station's morning news director, Nina Romina (Rene Russo).  As he muscles his way into the world of L.A. crime journalism, however, Bloom's dark side quickly emerges.

On the surface, Nightcrawler might seem like it is only a slick crime film, especially because of Robert Elswit's gorgeous cinematography.  What writer-director Dan Gilroy also offers, however, is a mean, edgy film that is classic L.A. crime story.  This film is high-quality neo-Noir that recaptures the classic, black and white L.A. Film-Noir, without being a prisoner to style and expectations.

Nightcrawler might not be the excellent film it is without Jake Gyllenhaal's marvelous performance as the sociopathic and murderously ambitious Lou Bloom.  It is now official; doubting that Gyllenhaal is a supremely talented and skilled actor is no longer okay.  I must also throw some cheer Rene Russo's way.  Hell, yeah, she's good, but Hollywood industry ageism now keeps her away from audiences.  She takes a throwaway character like Nina and makes her crucial to the execution of the narrative.  Also, I must not forget Riz Ahmed.  As Rick, Bloom's desperate-for-money assistant, Ahmed delivers a star-turn that just comes out of nowhere.

Nightcrawler is not perfect; some of it seems a bit far-fetched.  Louis Bloom gets away with things that stretch credulity, although I won't be specific in order to avoid spoilers.  Still, I was destined to like Nightcrawler because I like neo-Noir set in Los Angeles.  I think that what makes Nightcrawler so fascinating to watch are the things that sometimes make it hard to watch.  Dan Gilroy's gem is blunt about a morally bankrupt society in which class status is everything and in which society treats actual people as nothing more than commodities.

Posted by Leroy Douresseaux at 7:57 AM