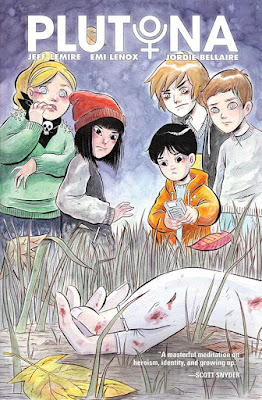 PLUTONA FANS WILL ENJOY A LIMITED EDITION HARDCOVER THIS JULY

Master storyteller Jeff Lemire (Descender, Sweet Tooth) and critically-acclaimed artist Emi Lenox (EmiTown) bring readers a heartfelt and heartbreaking coming-of-age tale exploring friendship and loss in PLUTONA. Image Comics is pleased to announce that PLUTONA will be available as a limited edition hardcover as well as in trade paperback this July.

In PLUTONA, five suburban kids make a shocking discovery while exploring the woods one day after school... the body of the world's greatest superhero, Plutona, laying dead among the mud and grass. This discovery sends them on a dark journey that will threaten to tear apart their friendship and their lives.

PLUTONA trade paperback (ISBN 978-1632156013) hits comic book stores on Wednesday, July 20th and bookstores on Tuesday, July 26th, and will be available for $16.99. It can be ordered by retailers from Diamond Book Distributors with Diamond code MAR160642. It can be preordered now on Amazon, Barnes & Noble, Indiebound, and Indigo.

Fans can purchase a replica of the pear sweatshirt worn by Mie in there story at Image Direct.

“Plutona is the kind of character driven tale that  we’ve all come to love Jeff Lemire for, but the real star here is the beautifully drawn pages by Emi Lenox. Her cartooning crafts a world I can feel by just looking at it. We’re lucky to have Jeff and Emi making books like this.“ —Skottie Young

“Like the very best comics, Plutona transcends any single genre. At once a gripping mystery, an epic superhero tale, and a deeply affecting coming-of-age story, Plutona presents Lemire and Lenox at the height of their powers—a masterful meditation on heroism, identity, and growing up. One of the best books of the year.”  —Scott Snyder

"Plutona is your new favorite comic. As heartfelt and beautiful as any of Lemire's previous works, and the artwork from Emi Lenox is like a breath of fresh air." —Nerdist

"Plutona will make you feel like a kid again." —Vox.com

"A contemporary, super-powered take on Stand By Me brought to life with expressive, nuanced art from Emi Lenox... The kind of emotionally complex story that makes you want to cry for no discernable reason. Pick it up and try not to drip salty tears on the pages." —Paste Magazine

Posted by Leroy Douresseaux at 7:44 PM