I Reads You Comics Review: BADGER #1 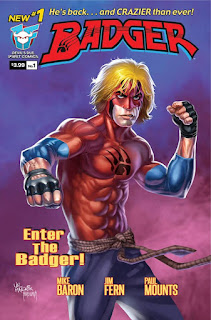 Badger was mostly set in Madison, Wisconsin.  The lead character was Norbert Sykes, a Vietnam War veteran who suffered from multiple personalities.  Sykes' most dominant personality was “Badger,” a martial arts expert who had mastered untold numbers of “esoteric and arcane” martial arts.  Badger was also a self-styled crime fighter and costumed vigilante.

Badger #1 opens as Norbert Sykes enlists in the United States Army.  Eventually, Sykes is placed in the Army's “Explosive Ordinance Disposal” (a “bomb squad”), and is assigned a puppy that he names “Otis” as his partner.  Sykes and Otis eventually become an outstanding insurgent/terrorist-fighting duo, but the traumas and tragedies forces a different side of Norbert Sykes to the surface.

Over the years, I often wondered what happened to Mike Baron, who enjoyed some success as a writer at DC Comics and at Marvel Comics in the late 1980s and into the early 1990s.  After the late 1990s, he seemed to disappear from comic books, except on occasion when Nexus, a comic book series he created with artist Steve Rude, returned.  I think Baron wrote English script adaptations for manga published by Del Rey Manga.

I also occasionally thought about Badger, a comic book character I had enjoyed for a number of years.  Reading this new Badger #1 reminded that what I truly missed was Mike Baron writing Badger.  Baron has merely changed Norbert Sykes from a Vietnam vet to a veteran of the Global War on Terror (or whatever it is called).

Baron offers a Badger #1 that is an easy-to-digest origin issue.  In this gone-on-too-long age of “decompressed” comic book storytelling, Badger #1 is stunningly efficient, giving readers most of what they need to understand Norbert Sykes and to go forward with the series.  A reader could stop here and feel that he read a good single-issue story.  I don't know how long the new 1First Comics will last, but if this new Badger can be as inventive and as offbeat as the long-running 1980s series, we are in for a treat.