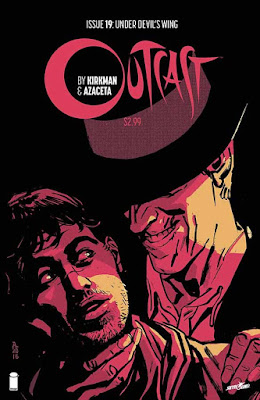 MORE CHILLS AND THRILLS FROM OUTCAST BY KIRKMAN & AZACETA

Previously in OUTCAST BY KIRKMAN & AZACETA, Kyle was faced with the most emotional exorcism he’d performed yet, as he learned more about his abilities and what’s really happening around him. Secrets were revealed that changed everything.

In OUTCAST BY KIRKMAN & AZACETA #19, answers are given and secrets are revealed, as the start of a new story arc finds Kyle and Sidney having a conversation that will change EVERYTHING. Kyle has never been in more danger.

“For the first three story arcs we've been laying out the mystery of this world and now it's time for answers,” said Kirkman. “It's been very exciting to finally be revealing the bits and pieces that will explain this world a little better and set the stage for many years to come.”

"What I love about where we are now in the story is that we're getting to really see the scope of what's happening,” said Azaceta. “If you thought it was scary when Kyle and Anderson were dealing with one possessed child, you're going to be in for some big fun."

Posted by Leroy Douresseaux at 10:11 AM