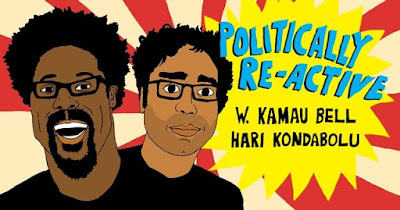 With the Political Circus of the 2016 presidential election heating up, you can laugh or you can cry. Choose to laugh

To Be Distributed By The Panoply Podcast Network, This Weekly Podcast Will Feature a Discussion On The Political Process With Rotating Expert Guests

Each 20-25 minute podcast of Politically Re-Active with W. Kamau Bell and Hari Kondabolu will include a deep dive on a specific topic or theme with a guest who is an expert on the spotlighted topic. The episodes will include comedic signature segments and occasional guests from the stand-up comedy world.

Lisa Leingang, Senior Vice President, Programming for First Look Media said, “W. Kamau Bell is a gifted comedian with a unique brand of political and social humor who brings a highly engaged and diverse audience with him to Politically Re-Active. We couldn’t be more excited to be working with Kamau and Hari, a true comedic dream team and our first and only picks for First Look Media’s inaugural podcast.”

W. Kamau Bell commented, "I couldn't be more excited that an incredible genre busting group of lefty hippies like First Look Media would allow me to live my dream of podcasting with one of my best friends and favorite comedians, Hari Kondabolu. Politically Re-Active is the result of many hours and hours of phone conversations, innumerable green room hangouts, and millions of calories of desserts eaten far too late at night after comedy shows that didn't start the revolution like me and Hari thought they would. The revolution will be podcasted and it will be hilarious."

W. Kamau Bell is a sociopolitical comedian who is the host of the TCA Award nominated CNN docu-series, United Shades of America. Before United Shades, Kamau was best known for his critically acclaimed, but criminally short-lived FX comedy series, Totally Biased with W. Kamau Bell. The New York Times called Kamau “the most promising new talent in political comedy in many years.” Kamau is also proud to be the ACLU’s Ambassador of Racial Justice, although he’s also pretty upset that they didn’t give him a badge. Kamau is also the host of Kamau Right Now!, a public radio talk show that airs on KALW in San Francisco. The SF Weekly called Kamau “smart, stylish, and very much in the mold of politically outspoken comedians like Dave Chappelle,” though he was more excited that they called him “handsome."

Hari Kondabolu is a Brooklyn-based, Queens-raised comic who the NY Times has called “one of the most exciting political comics in stand-up today.” In March 2014, he released his debut standup album “Waiting for 2042” on indie-label Kill Rock Stars. He was NYU’s APA Institute’s “Artist in Residence” for the 2014-2015 Academic Year. Hari has done standup on the Late Show with David Letterman, Conan, Jimmy Kimmel Live, Live at Gotham and John Oliver’s New York Standup Show. His Comedy Central Presents half-hour television special debuted on the network in February 2011. He was also a writer and correspondent for the Chris Rock-produced Totally Biased with W. Kamau Bell on FX.

This podcast joins an array of exclusive First Look Media projects including: RISK, director Laura Poitras’ most recent film, which debuted last month in Cannes; Field of Vision’s The Journey, a six-part series published on The New Yorker website that follows the migration of a Syrian refugee; and NomiNation, director AJ Schnack’s docu-series on the Presidential campaign, published on VanityFair.com. First Look Media co-financed Spotlight, the Academy Award-winning Best Picture of 2016.


PANOPLY
Panoply, launched in 2015, is an innovative, full-service podcast network for premier media brands, authors, personalities and organizations. As the audio arm of The Slate Group, Panoply provides production, audience development, sales, and technology services for its expanding number of partners. With the launch of its content management system, Megaphone, in January 2016, Panoply became a full-service podcasting platform, making it possible for a wider range of new and existing podcasters to partner with the network. To learn more about Panoply’s new technology or to submit your podcast for consideration, please visit: http://announcements.panoply.fm/. To find out more about current Panoply programs or to subscribe to the network, please visit http://www.panoply.fm/ or search Panoply on iTunes.

FIRST LOOK MEDIA
First Look Media is a new-model media company devoted to supporting independent voices across all platforms, from investigative journalism and documentary filmmaking to smart, provocative entertainment. Launched in 2013 by eBay founder and philanthropist Pierre Omidyar with the belief that independent perspectives are vital to a vibrant culture and thriving democracy. First Look operates as both a studio and digital media company.