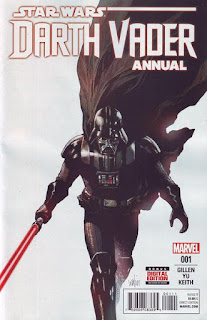 Darth Vader Annual #1 finds Darth Vader traveling to the planet, Shu-torun.  It is a Mid-Rim world known for producing valuable ore needed by the Empire for its ceaseless building projects.  The planet is ruled by the King who must also manage the dukes (“Ore-Dukes”), each one ruling over a domain that mines the precious ore so important to the Empire.

Of late, Shu-torun has failed to meet the delivery quotas set by the Emperor, so he has sent Lord Vader to reinforce the cooperation of the King and the Ore-Dukes.  There is, however, some game afoot.  The King has sent his third child, his daughter Trios, to meet Lord Vader, and perhaps to stall him.  Rebellion is reportedly brewing on Shu-torun, but against whom?  Plus, the malevolent droid duo, 0-0-0 (Triple Zero) and BT-1 (BeeTee One), have fun on their own.

I flipped through Darth Vader Annual #1 about two weeks before I got around to reading it.  Honestly, I put off reading it because it did not look appealing.  I was wrong – so wrong.  Writer Kieron Gillen offers a simple, straight-forward story, but it depicts Vader as the fearsome, bad-ass villain Star Wars fans want him to be.  That's all; this story is just Vader being Vader.

Gillen and Jason Aaron (who writes Star Wars) are proving to be the among the best Star Wars comic book writers ever, and at the rate they are going, I will likely think of them as the best if they can give us a few years of the same high quality at which they are already performing.  Gillen adds to the Star Wars universe, offering another world and another society, without altering anything.  It is nothing groundbreaking, but it enriches the ground that has already been broken.

Leinil Yu and Gerry Alanguilan's art stylistically resembles the work of P. Craig Russell, but the storytelling recalls Alex Raymond's Flash Gordon, which I am sure is one of the works that influenced George Lucas' creation of Star Wars.  This touch of Flash Gordon makes Darth Vader Annual #1 seem like classic space opera, with a touch of interplanetary romantic courtly intrigue.

This is the perfect one-off story for a comic book “Annual” special.  Here's to many more.