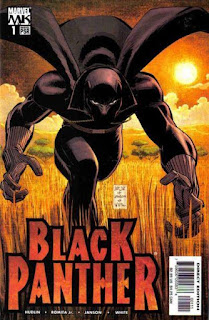 “Who is the Black Panther?” Part One

On occasion, I have come across some Black Panther comic books that I have liked, and Black Panther has appeared as a guest or co-star in other comic book series that I find memorable, such as in Fantastic Four #241, during John Byrne's incredible run as writer-artist during the early to mid-1980s.

Still, the Black Panther comic book that I have loved the most did not arrive until early 2005.  That year, Marvel Comics launched a new Black Panther series under the “Marvel Knights” (MK) banner.  It was written by Reginald Hudlin, a movie director and producer, who was best known, at the time, for directing House Party (1990) and Boomerang (1992).  He would go on to earn a best picture Oscar nomination as one of the producers of Quentin Tarantino's Django Unchained (2012).  This Black Panther comic book was drawn by John Romita, Jr. (pencils) and Klaus Janson (inks); colored by Dean White; and lettered by Chris Eliopoulos.

Black Panther #1 (“Who is the Black Panther?” Part One) opens in the Black Panther home land, the central African nation of Wakanda, during the 5th century A.D.  The story also visits Wakanda during the 19th century.  It seems that these are two moments in Wakandan history when the mysterious nation ably defended itself from outside raiders.  In the early 21st century, however, outside forces seek to penetrate the defenses and veil of Wakanda, this time successfully.

Within the last year, Marvel Studios has announced that it is producing a Black Panther feature film; has cast an actor to play Black Panther/T'Challa (Chadwick Boseman); and has selected a director for the film (Ryan Coogler).  So I decided to re-read 2005 Black Panther #1 again, which I had not read since it was first published.  It would be a start to rereading as much of that series as I could before Black Panther makes his first feature film appearance in the upcoming film, Captain America: Civil War.  Another reason for me to revisit this series is the anticipation of author, journalist, and political and cultural commentator, Ta-Nehisi Coates' upcoming work on the character.

I think what I like about Black Panther #1 is that it makes Wakanda and the legacy that is Black Panther so bad-ass.  Of course, Reginald Hudlin delivers a stellar script, full of enthralling action and mystery.  John Romita, Jr.'s pencils are some of his most stylish art, and Klaus Janson's stellar inking strengthens the compositions and storytelling.  Dean White's colors make the story seem as if it is on fire, almost too hot to handle for the imagination.  The Ohio Players said Fi-Ya!

However, it is the sense that the Black Panther mythos is as powerful as any other Marvel superhero mythos or world, and that makes this comic book so cool.  Black Panther is not a token, and he is more than historical.  His is a world within the larger world of the Marvel Universe with which others will have to reckon.  This is the gift that Reginald Hudlin gave to Black Panther.  Hudlin picked up on the strong work that Christopher Priest began in his 1998 Black Panther, which was the first step in making Black Panther a major character, for reals, and Hudlin kept it too-real for some readers slash haters.

Ta-Nehisi Coates, I hope you can make the Panther's claws sharper than ever.

Posted by Leroy Douresseaux at 6:27 PM