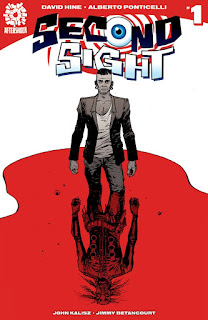 Second Sight is a new comic book series created and written by David Hine and drawn by Alberto Ponticelli.  The series focuses on a man who once became a celebrity because of his ability to see through the eyes of psychotic killers... before he was eventually accused of being a killer.

Second Sight #1 (“Vision in Red”) introduces Ray Palmer, owner of “The Bibliomaniac,” a bookstore that focuses on antiquarian and rare second-hand books.  Of late, he is plagued by bad dreams, and now two journalists, interested in his past, have added to Palmer's woes.

Once upon a time, Palmer was renowned psychic, Ray Pilgrim.  Now, that past has returned because of Ray's daughter, Toni.  She is using her blog to dig into a sex scandal involving The Wednesday Club, a rumored, secret club for the powerful.  Something else has also returned, threatening to reopen the darkest period in Ray's life.

I have read very little of David Hine's work, but what I have read I have found to be highly-imaginative and also inventive in a way most mainstream comic books are not.  In 2008, I read his original English language (OEL) manga, Poison Candy (TOKYOPOP), and was quite impressed.  Because of that American manga, I thought that Hine had the potential to be the next “great” British comic book writer in America.

After reading this first issue of Second Sight, I still believe that Hine's potential is largely untapped.  I think Hine's imagination will show itself in this series with stomach-turning aplomb.  Secret societies, child murders, pedophilia, sadism, masochism, serial killers, and some family dysfunction to cleanse the palette – it's almost more than I can digest... almost.

Alberto Ponticelli's twisty drawing style, edgy compositions, and darkly sweet storytelling is perfect for Hine's sweetly dark story.  I don't think that I can wait an entire month for #2...

Posted by Leroy Douresseaux at 7:38 AM