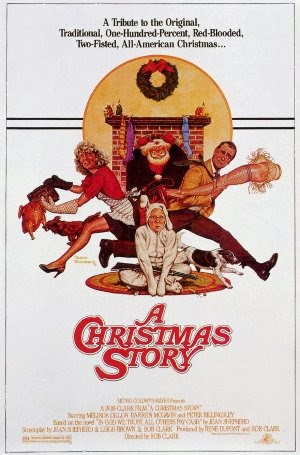 The subject of this movie review is A Christmas Story, a 1983 Christmas movie from director Bob Clark.  Although it was produced by an American film studio, MGM, some of the movie was shot in Canada.  A Christmas Story won two Genie Awards (then, Canada’s equivalent of the Oscars) for its direction and screenplay and was nominated in seven other categories, including “Best Motion Picture.”  In the film, a nine-year-old boy tries to convince his parents, his teacher, and Santa that a Red Ryder B.B. gun really is an appropriate gift for him.

The adults in his life, even Ralphie’s parents, Mrs. Parker (Melinda Dillon) and The Old Man aka Mr. Parker (Darren McGavin), think that the Red Ryder BB Gun is not a safe toy, or as they keep telling him, “You’ll shoot your eye out!”  While waging an all-out campaign for his BB gun, Ralphie dodges bullies and deals with his little brother, Randy’s (Ian Petrella) food issues.  Even Mr. Parker has his struggles as he fights a series of never-ending battles with his neighbor’s large pack of dogs, his home’s troublesome furnace, and an endless number of blown fuses.

I’m not sure why this delightful little Christmas movie works, but it does.  The narration isn’t always good; sometimes it sounds unprofessional.  The directing is exceedingly ordinary, but that adds a certain realism to movie.  Perhaps, A Christmas Story’s success is based on how real and authentic it seems.  Although set in the early 1940’s, A Christmas Story feels timeless.  Set in a town based upon Hammond, Indiana, where co-screenwriter Jean Shepherd grew up (but filmed largely in Cleveland, Ohio), the movie looks like it could take place in “Anytown, U.S.A.”

Wonderful performances help create the ambience.  Darren McGavin, who plays The Old Man, is always a welcomed sight, and Melinda Dillon is pitch perfect as the ideal middle-American mom.  What is really surprising is how good the child actors are, especially the leads Peter Billingsley and Ian Petrella.  Maybe, it’s because the child actors in this movie are real kids who act like real kids, while child actors often seem to struggle with portraying what they actually are – children.  As Ralphie Parker, Billingsley personifies the kid who just wants one thing for Christmas so badly, knowing that he might not get it.

In the end, maybe Billingsley’s performance is what makes A Christmas Story an indispensable Christmas movie, but there’s also much more in this gem of a yuletide flick to love.


Posted by Leroy Douresseaux at 7:37 AM