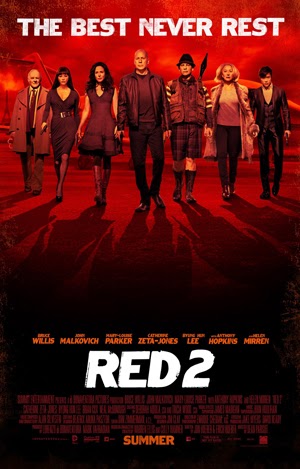 ACTION/COMEDY with elements of drama and romance

Red 2 is a 2013 action comedy from director Dean Parisot.  The film is a sequel to the 2010 film, Red.  Red 2 is inspired by Red, the comic book miniseries by Warren Ellis and Cully Hammer that was the basis for the first film.  Red 2 stars Bruce Willis as a retired CIA agent who joins his unique friends to find a long-missing nuclear weapon.

As Red 2 begins, retired CIA operative, Frank Moses (Bruce Willis), is enjoying domestic bliss with his girlfriend, Sarah Ross (Mary-Louise Parker).  His old friend and former operative, Marvin Boggs (John Malkovich), warns Frank that people are still after them.  In fact, a group of government agents approach Frank, claiming that they must interrogate him because he is R.E.D. (retired, extremely dangerous).

After Jack Horton (Neal McDonough), another government agent, tries to kill him, Marvin tells Frank that they are being tracked because of their knowledge of an old secret operation called, “Project Nightshade.”  Reluctantly, Frank reunites his unlikely team of elite operatives to solve the mystery of Nightshade, but he discovers that Sarah insists on being part of the team and she also wants her own gun.

Red 2 is fun to watch, but it lacks the sparkle that Red had as something new and different.  Red 2 is best when it focuses on the trio of Frank, Sarah, and Marvin.  Victoria Winslow (Helen Mirren) returns, but the character seems tacked on, at least until the last act when she really becomes useful.  The new characters are a mixed bag.  They have their good moments, but most of the time they come across as nothing more than as an excuse to cast movie stars in flashy small roles.  No-name actors could have done as good if not better than Anthony Hopkins and Catherine Zeta-Jones did in vacuous supporting roles.  I bet creating the character, Han Cho Bai, and casting Byung-hun Lee was nothing more than an attempt by this film’s producers to pander to the audience in the expanding East Asian market for American films.

Another thing that hampers this new film is all that globe-trotting the character do.  Red offered a jaunt across the landscape of American secret agent men and women.  Red 2 bops around Europe like a clumsy comic take on a Jason Bourne movie.


Posted by Leroy Douresseaux at 2:20 PM