Remembering Jack Benny: "To Be or Not to Be" 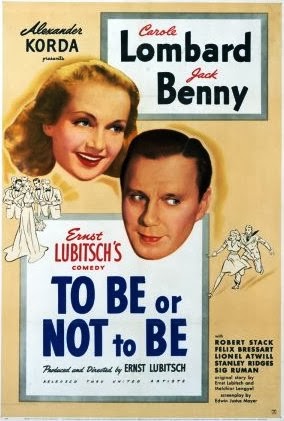 The subject of this movie review is To Be or Not to Be, a 1942 film starring Carole Lombard and Jack Benny.  The film was produced and directed by Ernst Lubitsch, who also wrote the film’s original story with Melchior Lengyel, although Lubitsch did not receive a screen credit.  Set during the Nazi occupation of Poland, the film focuses on an acting troupe involved in a Polish soldier’s efforts to track down a German spy.

If you’ve ever seen the 1983 Mel Brooks’ film, To Be or Not to Be and wondered how anyone could eke laughs out of the Nazi’s invading Poland, part of that most contentious time in recent history, World War II, then imagine how shocked many moviegoers must have been when they the original To Be or Not to Be, a 1942 directed by Ernst Lubitsch.

In occupied Poland, ham actor Joseph Tura (Jack Benny) leads a troupe of actors in a game of subterfuge against the Nazi’s.  It begins with the Nazi’s invasion of Poland.  At the same time, Tura’s wife, Maria (Carole Lombard, who was killed in a plane crash before this film was release), is returning the affections a young military pilot, Lt. Stanislav Sobinski (Robert Stack), who often visits the Turas’ theatre, the Polski, to woo Maria.  After the invasion, Sobinski escapes to England where he continues the fight against the Nazis.  However, he must sneak back into Poland to stop Prof. Alexander Siletsky (Stanley Ridges), a Nazi spy who has information on the efforts of the Resistance in Poland.  Upon discovering Maria and Sobinski’s playful “affair,” Tura is reluctant to help the young pilot, but his patriotism wins the day.  Tura and his ragtag troupe of actors don Nazi uniforms and march right into the heart of the Gestapo headquarters in Warsaw to take on Nazi Col. Ehrhardt (Sig Ruman), but his is a game not only to save the Resistance, but also save their own necks.

Ernst Lubitsch is perhaps one of Hollywood’s best directors of satire and subtle comedy, and his phrase, “The Lubitsch Touch,” became famous because his films reflected his sophisticated wit and style.  Taking nothing away from a novel concept and unconventional comic script or even denying the talents of the cast, a film like To Be or Not to Be could be a disaster without a master helmsman.  Lubitsch (who directed Ninotchka, The Shop Around the Corner, and Heaven Can Wait among other) gracefully mixes menace and comic in an erudite manner that manages to poke fun at the Nazi’s (essentially this movie is the filmmakers’ way of thumbing their noses at Nazi Germany), while satirizing the Nazis’ insatiable need to conquer and their arrogance in believing that they had all the right answers.  While Mel Brooks remake was broad slapstick presented as if it were a stage show (vaudeville?), Lubitsch film is a clever farce that treads broad comedy with highly understated sexual innuendo, cunning wordplay, and sly mischief.

Although they’re good, most of the cast comes across as either workman-like character actors and glorified extras, which is not an insult to them.  There are some standout performances.  Sig Ruman as Col. Ehrhardt personifies this film’s monsters/clowns approach to the Nazis, and Henry Victor is menacing as the machine-like Capt. Schulz, so much so that he is the victim of some of the film’s best humor.  Carole Lombard pretty much owns the first half of the film, and while the second half relegates her to a supporting player, it allows her breezy sexiness and comedic talents to shine through.  Whenever she dresses in an evening gown, the audience can see why she was one of those special actresses who personified the glamour of old Hollywood.

The second half of the film belongs to Jack Benny.  His gentle sarcasm, mock self-deprecating humor, and his clueless belief that he was more talented than he was – all part of his act – solidifies this film’s unusual mixture of farce, slapstick, patriotism, and idealism.  Benny is a sly fox and his Joseph Tura knows he’s smarter than the Nazi’s, even when he’s in mortal danger.  His performance mixes leading man as comic hero and comic hero as overconfident ringmaster.  The joke was supposed to be on Benny’s Joseph Tura, and it is for a long time.  Still, Tura will get the last laugh no matter how many times the joke’s on him.  It is that uncommon nature that makes To Be or Not to Be an inimitable comedy and drama.