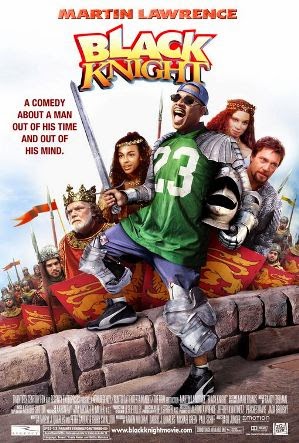 The subject of this movie review is Black Knight, a 2001 comedy starring Martin Lawrence and directed by Gil Junger.  At the time this film was produced, Junger had primarily directed episodes of television series such as Living Single and Ellen.  This movie is also loosely based on Mark Twain’s novel, A Connecticut Yankee in King Arthur’s Court (1889).  In Black Knight, Lawrence plays an amusement park employee who awakens to find himself in 14th century England after an accident.

Black Knight is a really bad movie, and I mean “bad” in its pejorative sense.  There’s nothing cool or hip about it, and Martin Lawrence could lose much of his street credibility behind this garbage.  He goes out of his way to harangue, embarrass, and make fun of people (his comedian’s job, I guess), and then he makes a dog like this.  Who’s dumb, now?

Those moments in the movie that might illicit a chuckle are so few and far between that a viewer could be too tired to laugh by the time he found anything worth a guffaw.  The movie is a star vehicle, one of the those movies made especially as a showcase to further the career and star power of its lead actor, so it’s not supposed to be art – just a commercial property; many star vehicles are.  However, this thing is practically impossible to watch, and it could turn people off Lawrence for a long time, if not forever.  All it takes is a few bombs like this, and people are wary of paying the high cost of a movie ticket to see a movie star’s latest work.  Ask Eddie Murphy.

A fish out of water story, Lawrence plays Jamal Walker aka Skywalker, an employee at a medieval theme park, who through some kind of accident, ends up in 14th century England.  Bare with me.  A despot, King (of England, I guess) Leo (Kevin Conway) comes to believe that Jamal is a Moor (that would explain his dusky complexion) who is a messenger from Normandy sent to herald some kind of Norman delegation.  To complicate matters, Jamal falls for Victoria the Chambermaid (Marsha Thomason), a black woman (if they can pass off Jamal’s presence, they can pass off hers) who is leading a covert assassination attempt against King Leo.

Okay.  In time travel stories, especially ones in which African-Americans are in lands where they were unlikely to be in a particular era, require a huge, willing suspension of disbelief.  And we know that the extreme cultural differences between the denizens of 14th century England and Jamal would ostensibly allow Martin to be very funny – the hip black man versus the so unhip, bland, not streetwise white medieval folks.  The premise might have sounded very funny when the writers first discussed it, laughing while they sat around smoking pot, drinking expensive liquor, or nursing a pile of coke on the living room table.  But tragedy struck when the premise became an awful script and Martin, probably awash in personal and mental problems, just couldn’t get his funny up.

Posted by Leroy Douresseaux at 7:53 AM