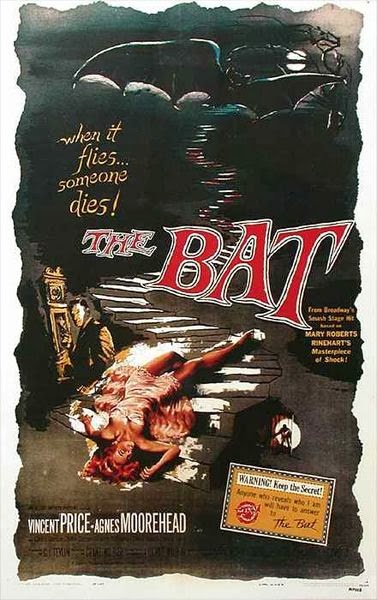 MYSTERY/THRILLER with elements of horror

The subject of this movie review is The Bat, a 1959 mystery-thriller starring Vincent Price and Agnes Moorhead.  The film is based on the 1920 Broadway play, The Bat, by Avery Hopwood and Mary Roberts Reinhart.  The play was adapted as a motion picture three times:  in 1926 as The Bat, in 1930 as The Bat Whispers, and again in 1959 as The Bat (the subject of this review).  The 1959 movie version focuses on a crazed killer, known as “The Bat,” who is on the loose in a mansion full of people.

Best-selling mystery author, Cornelia van Gorder (Agnes Moorehead, best known as “Endora,” the spiteful mother-in-law on the TV series, “Bewitched”), and her staff are summering at The Oaks, a fine estate near the small town of Zenith.  It is at The Oaks where Cornelia finds that she can write her hugely successful murder mysteries.  This summer, however, the locals are falling dead, and a mysterious, possible supernatural, killer known as The Bat is on the loose.

After The Oaks’ owner, John Fleming (Harvey Stephens), who also owns the local bank, dies, suspicions about the whereabouts of one million dollars in missing money from the bank, land squarely on The Oaks.  Soon, a bevy of townsfolk including the local coroner, Dr. Malcolm Wells (Vincent Price), Fleming’s nephew, Mark (John Bryant), the local law official, Lt. Andy Anderson (Gavin Gordon), and more are hanging around the mansion looking for the loot – with the threat of gruesome death at the hands (and claws) of The Bat hovering over them.

The Bat is one of those “spooky old house thrillers,” and is based upon a novel and play that was apparently very popular in the 1920 and 30’s.  This was the third film version of the story (the first was a silent film), and by 1959, this sub-genre of mystery films must have seemed quaint.  In fact, scary stories – the kind that take place in creaky old house riddled with secret passage ways where lies hidden money that is in turned hunted for by a masked villain – was soon to be (if not by the time of this movie’s release) children’s fare.  This is pretty much the template for most “Scooby-Doo” cartoons and other Hanna-Barbera cartoons like it.  Still, it’s very entertaining, and Vincent Price and Agnes Moorehead play to type.  This is a nice treat for the genre it represents.  In fact, The Bat holds the identity of its villain to the very end surprisingly well.


Posted by Leroy Douresseaux at 8:14 AM