Review: "Out of the Past" is an Entertaining Film-Noir (Happy B'day, Kirk Douglas) 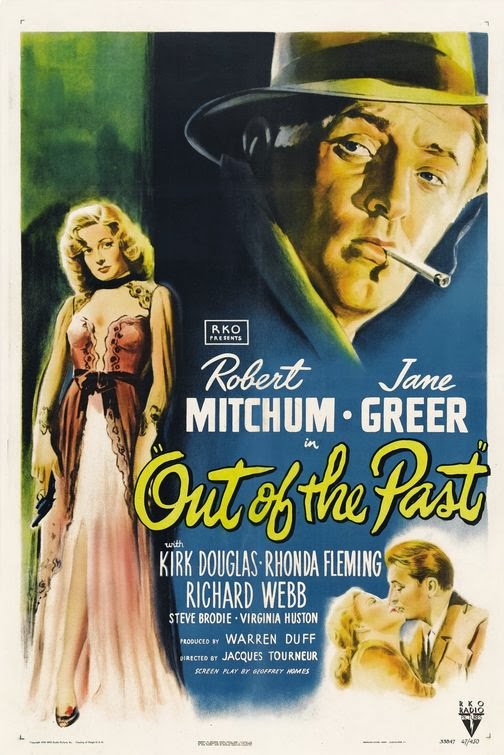 The subject of this movie review is Out of the Past, a 1947 film noir drama and thriller from director Jacques Tourneur.  The film is based on the 1946 novel, Build My Gallows High, by Geoffrey Homes (the penname of author Daniel Mainwaring), who also wrote the screenplay adapting his novel for this film.  Frank Fenton and James M. Cain also contributed to the writing of the screenplay, but did not receive screen credit.

Out of the Past stars Robert Mitchum as a private eye who escapes his past and runs a gas station in a small town.  Kirk Douglas and Jane Greer star as the hood and his dame (respectively), and they are the past that catches up to the former private eye.

Out of the Past is a definitive classic of film noir; some even consider it the best noir film ever.  It is certainly a film that stands the test of time because it is not only fondly remembered and on the National Film Registry, it was also remade as the 1984 film, Against All Odds.  Who can forget Phil Collins’ powerful theme song for the film?

Jeff Bailey (Robert Mitchum) is a gas station owner with a troubled past.  It catches up with him when a tough looking, film heavy named Joe Stephanos (Paul Valentine) comes looking for Jeff and tells him he needs to take a trip.  Stephanos and his employer are “acquaintances” of Jeff’s.  So Jeff’s trip is to pay a visit to that old friend, gambler and mobster, Whit Sterling (Kirk Douglas).  It turns out Jeff was once a private eye named Jeff Markham (told in a flashback) whom Sterling hired to find his mistress, Kathie Moffat (Jane Greer), a drop-dead gorgeous woman who’d shot Sterling several times and disappeared with 40,000 of Sterling’s dollars.  Bailey did find her, but the unexpected (or expected) occurs.  Now, Sterling wants payback, so he coerces Bailey into taking another job for him, one that might cost Jeff his neck or a trip to the gas chamber.

Out of the Past has all the things that marks a movie as film noir, especially the lighting, the dangerous dames, menacing thugs, snappy dialogue, and hard-living hero.  The film actually seems longer than its running time, and that’s good.  The director and screenwriters pack a lot of twists and turns into this film.  It’s beautifully shot, and the dialogue is not only snappy (which might take some getting used to for people not familiar with noir or movies from the 1930’s and 40’s), but it’s also quite witty, sharp, and biting.  The film is engaging and almost compels the viewer to keep watching.

They really don’t make movies like this anymore or movie stars like this.  Robert Mitchum is an electric and magnetic presence, so much so that he almost steals the film from his co-stars.  It’s obvious why every female character in the film wants to disrobe for his Jeff Bailey.  In fact, if it weren’t for Kirk Douglas’ own super-powered film presence, his Whit Sterling couldn’t register as a dangerous adversary for Mitchum’s Bailey.

With nearly ever scene revealing another twist or surprise, Out of the Past is an absolute delight and a must-see for fans of the cast and film noir.  It’s only shortcoming is that the script brushes aside too many characters, and while those characters’ motivations aren’t contrived, they’re turned into a kind of short hand or footnote, although if developed only a little more, they’d enhance the story.  In places, the film lacks meat on its bones and lacks the emotional resonance to fully sell the various relationship triangles.  That said, this is still very entertaining film-noir.


Posted by Leroy Douresseaux at 8:22 AM