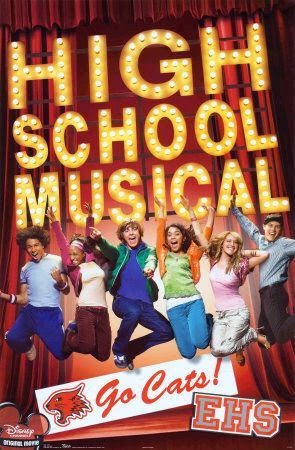 MUSICAL with elements of comedy, drama, romance, and sports

When it debuted on the Disney Channel on January 20, 2006, High School Musical was just another “Disney Channel Original Movie” …to some.  To others, especially the so-called “‘tween” audience (usually described as 10 to12-years old), the telefilm was something special.  It was a smash hit in its time slot when just under eight million viewers tuned in to watch the premier, and the numerous repeat broadcasts since then also remain highly watched.  The High School Musical soundtrack album has been certified quadruple platinum, and the various DVD releases have also sold almost 8 million copies.  So what’s it all about?

High School Musical (HSM) is a twist on Romeo & Juliet and a kind of 21st century take on the hugely successful 1978 film, Grease (itself adapted from a Broadway musical).  HSM is set in Albuquerque, New Mexico and takes place mostly on the campus of East High School, home of the Wildcats.  Troy Bolton (Zac Efron), the basketball team’s star player, and Gabriella Montez (Vanessa Anne Hudgens), a brainiac and the new girl in school, fall in puppy love.  They also end up auditioning for the school winter musical, performing a duet that earns them a call back.

However, Troy and Gabriella find themselves at odds with their family and friends who think that the two should “stick to what they know.”  For Troy, that means devotion to the Wildcats basketball team and the upcoming championship game against West Side High.  Troy feels the most heat from Coach Jack Bolton (Bart Johnson), who is also Troy’s father, and Chad Danforth (Corbin Bleu), Troy’s best friend who is devoted to basketball.  For Gabriella, her friends in the Science Club, especially Taylor McKessie (Monique Coleman), think that Gabriella should focus on the upcoming Scholastic Decathlon.

Meanwhile, the school’s reigning musical duo, fraternal twins, Sharpay Evans (Ashley Tisdale) and her brother, Ryan (Lucas Grabeel, who has a strong, beautiful singing voice), don’t want anyone competing with them for the leads in the winter musical.  Also, Ms. Darbus (Alyson Reed), the school’s drama teacher, isn’t sure she wants a basketball player in her musical, especially Troy because Ms. Darbus and Coach Bolton are often at odds.

Despite that, Troy and Gabrielle get together with fellow student Kelsi Nielsen (Olesya Rulin), a pianist and the winter musical’s composer, and practice their singing.  When Troy’s teammates and Gabriella’s fellow science clubbers learn that the duo is serious about the musical, they conspire to break them apart, but will they end up wishing they’d kept Troy and Gabriella together.

Simply put, I’m a fan of this hugely fun and highly entertaining movie.  I don’t really know why it works.  Perhaps, it’s Disney magic.  I’m not being silly.  Shortly into the film, after two strangers, Troy Bolton and Gabriella Montez, come together and start singing in harmony as if it were always meant to be, one has to believe only Disney can get away with this.  Just feel the magic and charm of this flick and go with it.

The songs are really good, and some of them are just good enough to move the narrative forward or flesh out a plot point, character, or mood.  The acting is credible if not often very good, but when the cast sings or when a song becomes an elaborate song and dance number, the move becomes even more fun.  Maybe, part of its appeal is that many wish their high schools were like East Side High, but since we can’t have that, we can dream.  High School Musical is that happy dream.


Posted by Leroy Douresseaux at 9:06 AM