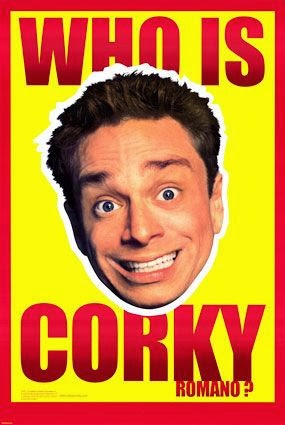 The subject of this movie review is Corky Romano, a 2001 crime-mafia comedy.  The film stars “Saturday Night Live” alumnus, Chris Kattan, as the loser son of a low-level Mafia boss forced to infiltrate the FBI.

Bad movies can be hilarious, eliciting countless belly laughs; sometimes they can be uproarious, which is the case with the Chris Kattan vehicle Corky Romano.  The writers filled the scripts with such implausibility (the central premise of a bumbling idiot infiltrating the Federal Bureau of Investigation stretches the imagination; then, again, who thought 9/11 could happen?), so one must really suspend disbelief.  Chris Kattan, an excellent physical comedian, probably as good as Jim Carrey, firmly takes control of this rickety movie.  He manipulates his co-stars as ably as he maneuvers his body and makes Corky Romano quite funny.

Corky (Chris Kattan) is an assistant veterinarian with dreams of being a licensed vet.  His father “Pops” Romano (Peter Falk) is a wealthy low-rent hood specializing in rackets and gambling, but some unknown person has implicated Pops on murder charges.  The feds are after him, and he’s facing hard time (in the typical “upstate” prison).  He and his sons Paulie (Peter Berg) and Peter (Chris Penn) have hatched a plan to have Corky infiltrate the local FBI office the way the feds have obviously penetrated the Romanos’ operations.  Paulie, a functional illiterate, and Peter, a closet homosexual, have no faith in their brother Corky, but they assist him in his mission to pass as an agent of the FBI and retrieve whatever incriminating evidence they have on Pops.

Once inside, Corky, through the usual movie luck, misunderstanding, and being in the wrong place at the right time somehow convince the feds that he’s a topnotch agent.  His boss Howard Shuster (Richard Roundtree) loves him, and Corky catches the eye of a comely, young FBI wench, Agent Kate Russo (Vinessa Shaw), who is, of course, trying to show the guys that she’s just as good as any male agent.  While most of his colleagues think that Corky is the not only the real deal, but a great G-man, Agent Brick Davis (Matthew Glave) is a rival with Corky for Shuster’s attention and approval, and he out to prove that Corky is a phony.

If you set your brain on dumb, you’ll have a great time because Corky is an very good, bad movie.  Although it’s short on the kind of grossness one can expect from the American Pie and Austin Powers films, Corky Romano has it’s share of bizarreness.  All the male characters in the film really crave the attention of their male peers and associates (in addition to the whole father-son-mentor subtext), and there is a not-too-subtle gay subtext of physical attraction between men, not to mention that certain male characters are always paired together.  Either way, Corky Romano is many cheap laughs, and sometimes, that is hard to find in many movies that claim to be funny.

Posted by Leroy Douresseaux at 6:55 AM