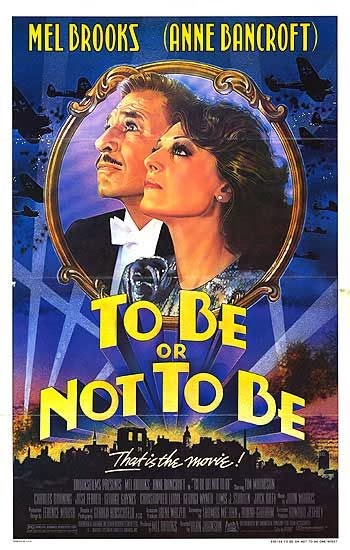 COMEDY/DRAMA with elements of music and war

The subject of this movie review is To Be or Not to Be, a 1983 comedy-drama starring Anne Bancroft and Mel Brooks, who also produced the film.  Directed by Alan Johnson, To Be or Not to Be is a remake of the 1942 film, To Be or Not to Be, which starred Carole Lombard and Jack Benny.  In the 1983 film, a bad Polish actor is depressed that World War II has complicated his professional life and that his wife has a habit of entertaining young Polish officers.  One of her young officers, however, is about to get the actor and his acting troupe involved in a complicated plot against the Nazis.

Frederick Bronski (Mel Brooks) and his wife, Anna (Anne Bancroft), are impresarios of a Polish acting troupe in Warsaw, Poland circa 1939.  Their Bronski Follies, performed of course in the Bronski Theatre, is the toast of the city.  However, Germany invades Poland, and, arriving in Warsaw, the Nazis take the Bronskis’ stately home as their headquarters and also close the theatre.

Later, the Bronskis and their acting ensemble get involved with Lt. Andre Sobinski (Tim Matheson), a young Polish fighter pilot (who is smitten with Anna), in a complex subterfuge to prevent the Germans from getting their hands on a list of Polish underground fighters.  Things get more complicated when Nazi Colonel Erhardt (Charles Durning, in a performance that earned him an Oscar nod) orders the Bronski Theatre open again to perform for the Furher himself when Adolf Hitler visits Warsaw.

Real-life husband and wife Mel Brooks and Anne Bancroft made a great comic team in To Be or Not to Be, a zesty remake of Ernst Lubitsch’s 1942 film classic starring Carole Lombard and Jack Benny.  This film is, of course, filled with delightful musical numbers and a splendid array of costumes, clothes, and uniforms.  But what would a Mel Brooks film be without comedy?

Although Brooks did not direct To Be or Not to Be (the honor went to Alan Johnson), this is clearly a “Mel Brooks movie.”  It isn’t a parody or send-up of anything (as Brooks films are want to be).  It is, however, a witty and often dark farce marked by suave comedy and droll dialogue.  The Nazis are played for fun (Christopher Lloyd and Charles Durning make a comical duo), but their awful menace is always present.  The filmmakers managed to be both respectful and funny with history.  While To Be or Not to Be isn’t as funny as Blazing Saddles or Young Frankenstein, it isn’t far behind those two comic classics, and it is a fine comedy-historical in the vein of Brooks’ History of the World, Part I.


Posted by Leroy Douresseaux at 7:26 AM