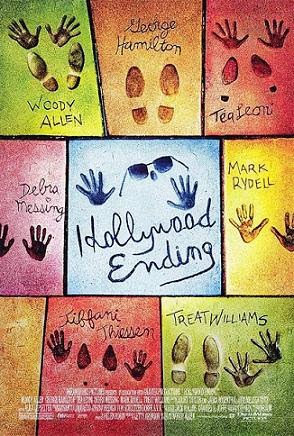 The subject of this movie review is Hollywood Ending, a 2002 comedy from writer/director Woody Allen.  The film follows a movie director who is forced to work with his ex-wife and is also suffering from a case of psychosomatic blindness.

Val Waxman (Woody Allen) is a once-famous movie director who is so down on his luck that he’s down to his last shot at getting his career back.  Luckily, his former wife, Ellie (Téa Leoni), is a development executive at Galaxie Pictures and is the fiancé of the company’s studio boss, Hal Yeager (Treat Williams), and Ellie talks Hal into letting Val direct their big budget remake of a 1940’s film, “The City that Never Sleeps.”  However, Val’s paranoia and neurotic fears cause him to go psychosomatically blind.  Val’s agent Al Hack (Mark Rydell) and a sympathetic Chinese translator conspire to cover Val’s temporary disability, but with Andrea Ford (Jodie Markell), a nosy Esquire magazine writer, around the set, it’ll be hard to keep Hal from discovering that Val is trying to direct a film when he can’t see.  Will Ellie pitch in to save Val?

Hollywood Ending is not quite the typical Woody Allen flick.  It is indeed a New York-based tale of dysfunctional lovers trying to get back together.  Half the plot, however, involves the politics and struggles of getting a big studio movie made, and pretty much everything in Hollywood Ending related to that is funny.  The romance is nice, but all too familiar for those who’ve seen lots of Woody, and it made me yearn for this movie to get back to the part about movie making.  There aren’t any great performances, although Treat Williams and Mark Rydell as a studio exec and Val’s agent respectively do generate a little heat.  Hollywood Ending is strictly for Woody Allen fans and people who like to watch insider films about movie making.  Even the Hollywood ending seems a bit hollow.


Posted by Leroy Douresseaux at 6:08 AM