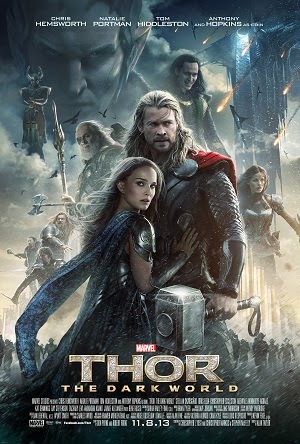 Thor: The Dark World is a 2013 superhero movie from Marvel Studios.  It is a sequel to the 2011 film, Thor, and follows the 2012 film, Marvel’s The Avengers.  Thor is a Marvel Comics character that first appeared in the comic book, Journey into Mystery #83 (cover dated August 1962).  Created by artist Jack Kirby and writers (and siblings) Stan Lee and Larry Leiber, Thor is based on the Norse mythological deity of the same name.

In Thor: The Dark World, Thor finds himself facing a powerful enemy and is forced to embark on a perilous journey to the enemy’s ruined home world.  After The Avengers, I consider Thor: The Dark World to be the best film in the Marvel Cinematic Universe (which currently includes eight films).  Like The Avengers, The Dark World is filled with the kind of big action scenes and battles between super-powered beings that are true to the spirit of superhero comic books.

Thor: The Dark World begins with a story.  Once upon a time (eons ago, in fact), Bor, the father of Odin (Anthony Hopkins), clashed with and defeated the Dark Elf Malekith (Christopher Eccleston), who sought to destroy the universe by using a weapon known as the Aether.  Now, Malekith is back.  He plans to use Aether during an upcoming event called the Convergence, a rare alignment of the Nine Realms, to destroy this universe.

Malekith and his Dark Elves prove to be quite successful at attacking Asgard, home of Thor (Chris Hemsworth) and the Norse gods.  Thor is forced to seek the help of his imprisoned brother and enemy, Loki (Tom Hiddleston).  Meanwhile, astrophysicist Dr. Jane Foster (Natalie Portman), Thor’s love interest, accidentally makes herself the object of Malekith’s attention.  With time running out, Thor and his allies are forced to make their last stand against Malekith in London, England.

Some 30 years ago, Stephen King, in an interview he gave to Time Magazine or Newsweek, compared his novels to either the “Big Mac” or McDonald’s menu items in general.  Marvel Studio’s films are meant to be pleasing like popular fast foot items, such as the “Big Mac,” but they are not necessarily some fast food product meant for quick consumption.  Marvel certainly wants to entertain, but high-stakes movie production means that you have to do more than create disposable entertainment.

Marvel uses modern movie technology, especially computer-generated imagery, to create worlds, creatures, and battles that, once upon a time, could only have been visualized in superhero comic books.  Thor’s battles with Malekith are a fanboy delight of ballet and destruction, but not in that overdone, desperate way that The Man of Steel did super-powered battles.  Thor: The Dark World left me wanting more battles.

Another thing that Thor: The Dark World does well is personal conflict.  There is not a moment when Thor and Loki’s rivalry and abhorrence for one another do not feel real.  Loki’s lust for revenge, his dishonesty, and the fact that it is hard to tell if he has any good feelings for anyone are the things that make the discord in the House of Odin as riveting as hot soap opera melodrama.  Chris Hemsworth as Thor and Tom Hiddleston as Loki give good, convincing performances that help the Thor-Loki feud and union carry this movie to its meat-and-potatoes final act – the big battle between Thor and Malekith.

Kudos to Natalie Portman and the filmmakers for making Jane Foster a real character in this film, that is necessary to the resolution, instead of being another action movie female appendage.  Of course, Anthony Hopkins throws it down for real, being a great actor, and giving this pop movie concoction the same effort he would to a “serious art movie” or stage drama.  Thor: The Dark World is successful in ways that the Marvel Studios movies, which focus on a single character, have not quite been since the first Iron Man movie back in 2008.  I hope the next Thor or Marvel movie is like Thor: The Dark World.


Posted by Leroy Douresseaux at 6:42 AM