Review: "Force of Execution" Has a Cap for Every Ass 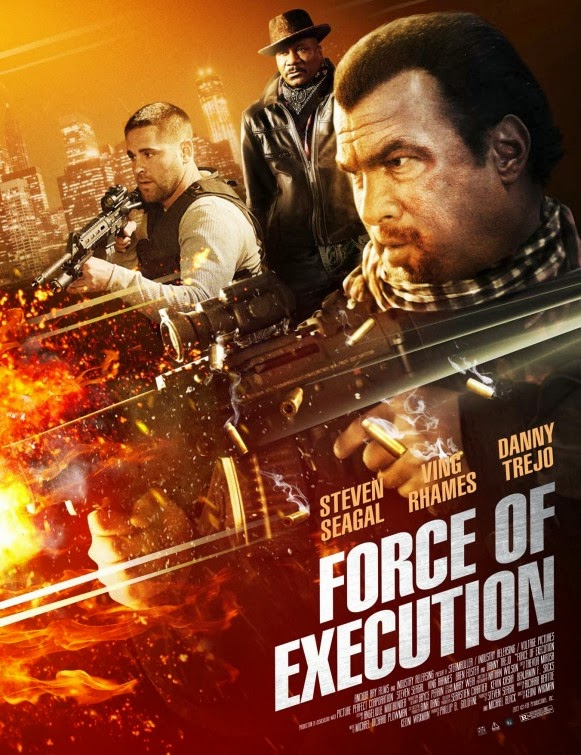 Force of Execution is a 2013 action and crime thriller from director Keoni Waxman.  Starring Steven Seagal and Ving Rhames, Force of Execution focuses on a war between a crime boss concerned about his legacy and the new boss who wants to take his place.

Mob kingpin Mr. Alexander (Steven Seagal) is an old-school boss – the kind who rules his criminal empire with nobility as well as brutality.  His protégé is Roman Hurst (Bren Foster), a skilled fighter and hit man.  Alexander assigns to Hurst a simple prison hit that goes wrong, and Hurst is forced to pay a price for his “failure.”

Later, challenges to Alexander’s power arise on two different fronts.  The first is a cold-blooded gangster known as “The Iceman” (Ving Rhames) or simply, “Ice.”  Ice is a kind of prince of a powerful street gang, and he soon begins to consolidate power, using murder and mayhem strategically.  The second group of rivals is a merciless Mexican cartel, led by a man known as Cesare (J.D. Garfield).  As these groups divide and fight over territory, the body count rises.  A shadow player, Oso (Danny Trejo), ex-con and cook, has a few hidden moves of his own.  He is helping the man who may well decide the winner of this citywide gangway find redemption and healing.

Force of Execution is by no means a great movie, but it is a surprisingly entertaining crime flick.  It is kind of like a clunky version of a Hong Kong action movie/shoot ‘em up.  Force of Execution’s biggest problem is in the writing.  Like Brooklyn’s Finest or the recent Pawn, Force of Execution has a screenplay that would work better if it were the basis for a television series.  This movie has a lot of good characters, but writers Richard Beattie and Michael Black squeeze them into a storytelling timeframe that is not adequate for allowing several characters to emerge and to fully develop, at least not the way a television series would.

Still, the script seems tailored made to let Steven Seagal, Ving Rhames, and Danny Trejo portray the kind of on-the-edge, crazy characters that movie fans want to see these actors play.  Older and pudgier, Seagal does not have to move very fast to be a convincing bad ass, and he can still kick some ass.  As far as I’m concerned, Danny Trejo is always a good thing.  There is always a little bit more to his characters than is obvious, and in this movie, that little bit more involves a kind of person called a “curandero.”

As for Ving Rhames:  well, as The Iceman, he calls everybody “nigger.”  I love a movie that lets niggas call niggas “niggas,” and here, Ving Rhames calls blacks, whites, browns, etc. “nigger,” when he is feeling jolly and little bit dangerous.  As Ice, Rhames has this movie’s best dialogue, and he makes good use of it.

I do wish the story had a better focus on Bren Foster’s Ramon Hurst.  Foster is good in the fight scenes, although he needs to improve as a dramatic actor.  Still, Foster would be a good choice to play the lead if some studio remade a classic Seagal flick like Marked for Death or Out for Justice.

Force of Execution is enjoyable.  It’s fun to watch Seagal beat people up and throw them into furniture and stacks of whatever is nearby.  Hand-to-hand combat does not take a backseat to gunplay, and the executions do have force behind them.  I wouldn’t mind at sequel to Force of Execution, at all.


Posted by Leroy Douresseaux at 2:28 PM