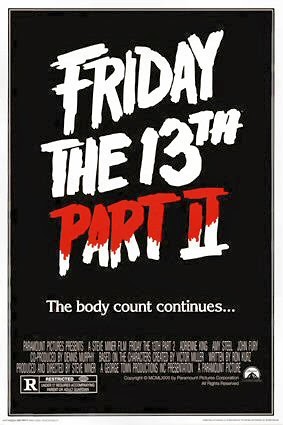 The main story of Friday the 13th Part 2 takes place five years after the events of the first film.  Paul Holt (John Furey) has established a “Counselor Training” center on Crystal Lake, near the infamous Camp Crystal Lake AKA “Camp Blood.”  Paul ignores the fact that locals are not happy about him locating his training center so close to the site of several murders, and instead, he focuses on getting his large group of counselors together.  Only Paul’s assistant and sort of girlfriend, Ginny Field (Amy Steel), takes rumors about Jason Voorhees stalking the grounds of Crystal Lake.  One rainy night, however, a killer makes a move against the unwary camp counselors.

Recently, I watched Friday the 13th Part 2 in its entirety for the first time.  I have previously watched the movie in parts countless times, and I usually liked what I saw.  Strangely, I always found this movie to be a bit scary whenever I watched it in parts, but after watching the entire movie, I don’t find it particularly scary.  I wonder what the 15-year-old me would have thought of this film.

Friday the 13th Part 2 is a strange movie.  It opens with a 12-minute prologue (of sorts) that is set two months after the events of the first film, before returning to Crystal Lake.  Jason does not start killing campers until 50 minutes into the movie.  There is also a dream sequence that muddles the ending of the movie, but that dream sequence contains what may be one of the most famous moments in American horror cinema history.  Also, this film’s heroine does not really stand out as the hero until the last half-hour of the movie.  At this point in the franchise, Jason Voorhees is not the supernatural killer he would become.  Here, he seems like nothing more than a deranged killer.


Posted by Leroy Douresseaux at 6:55 AM