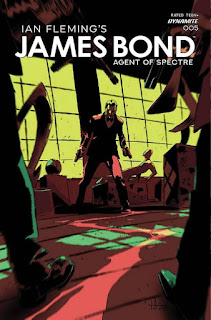 Over the past 50+ years, Bond has made sporadic appearances in comic books, but Dynamite Entertainment has been steadily publishing James Bond comic books since early 2016.  Their latest James Bond comic book is the five-issue miniseries, James Bond: Agent of SPECTRE.  It is written by Christos Gage; drawn by Luca Casalanguida; colored by Heather Moore; and lettered by Simon Bowland.   The series finds James Bond taking sides in a civil war within SPECTRE, the international criminal organization that has long been Bond's enemy.

Titania Jones, an upstart American member of SPECTRE, is attempting a coup, threatening to depose its longtime leader, the criminal mastermind, Ernst Stavro Blofeld.  Titania is on guard against Blofeld's men, so to take her out, Blofeld recruits a wild card, James Bond!  With Blofeld threatening the life of his friend, CIA operative, Felix Leiter, as leverage, Bond agrees.  However, Bond has a plan to use this internal strife to bring SPECTRE down once and for all.  Will he succeed, or is this a dark path from which even 007 cannot return?

James Bond: Agent of SPECTRE #5 opens on the Island of Meraki, Greece.  It is the location of the ancestral home of Blofeld, and it is the site of the final showdown between Blofeld, 007, and Titania Jones, the would-be new leader of SPECTRE.  This “SPECTRE Civil War” reaches its explosive conclusion, but who will come out on top, the established Blofeld or the upstart Titania?  And will 007 survive this struggle, and can he use it to bring SPECTRE down from within?

THE LOWDOWN:  The only Dynamite James Bond comic book series I have read is Warren Ellis' twelve-issue run, James Bond, Vol. 1 (2016-17), which is comprised of two story arcs, “Vargr” and “Eidolon.”  Dynamite Entertainment's marketing department recently began providing me with PDF review copies of some of their titles.  One of the first batch is the fifth and final issue of James Bond: Agent of SPECTRE.

James Bond: Agent of SPECTRE #5 is the first issue of the series that I have read.  I used the Diamond Comic Distributors' “Previews” listings to get the lowdown on the previous four issues of the series.  I figured out enough about the story line to say that writer Christos Gage has brought James Bond: Agent of SPECTRE #5 to a satisfying conclusion.  Gage also sets up some interesting threads for future James Bond comic books.

The art team of Luca Casalanguida and colorist Heather Moore are good, but Casalanguida's compositions are a little too impressionistic for this story.  I do like Casalanguida's interpretation of James Bond as a burly, brawny, meaty man who can throw his fists around.  Moore's coloring tends towards the garish a few times.  Simon Bowland's solid lettering keeps the art and graphical storytelling from being too off the wall.

I can say that James Bond: Agent of SPECTRE #5 suggests to me that this series might make for a fun read as a trade paperback.

I READS YOU RECOMMENDS:  Fans of James Bond comic books will want to try James Bond: Agent of SPECTRE.

Posted by Leroy Douresseaux at 2:45 PM