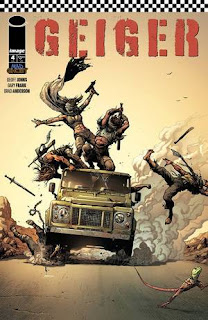 Geiger #4 (“The Organ People”) opens with another flashback reveal of Tariq's past life.  Now, it's time for Geiger and the siblings, Hailee and Henry, to begin their journey to the place on the map the children's later mother, Candace, gave to them.  Early in the journey, they meet “the Organ People,” and things change.

Meanwhile, back in Vegas, the identity of “the Beast” is revealed.  Plus, rival casino bosses strike a dangerous bargain.

THE LOWDOWN:  As first issues go, Geiger #1 was mostly an introduction, kind of like a prologue.  It introduced the title character, Geiger, giving readers a look at who he was in the past and a glance at who he is now.  Geiger #2 went inside Las Vegas.  With Geiger #3, Geoff Johns began to excavate the heart of the character drama and the passion of old grudges and conflicts.

With Geiger #4, Johns executes his first game changer – in terms of Geiger and the children's fates.  Readers, however, will love the Mad Max 2/The Road Warrior action sequence and the A Boy and His Dog vibe.

In the third issue, Gary Frank's pencil art captures the emotions, passions, and hotter blood of the relationships of the past that shape the present of Geiger's narrative.  In this fourth issue, Frank goes back to the kind of action comic book art and graphical storytelling that he regularly executes as a superstar superhero comic book artist.  He makes Geiger #4 a bracing read.