Comics Review: "The Other History of the DC Universe #1" Illuminates Black Lightning 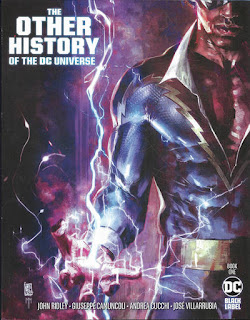 Black Lightning/Jefferson Pierce is a DC Comics superhero character.  He was created by writer Tony Isabella and artist Trevor Von Eeden and first appeared in Black Lightning #1 (April 1977).  Black Lightning's origin has changed since his debut.  He originally gained “electrical superpowers,” but he is currently depicted as a “metahuman” who was born with the ability to manipulate and generate electricity.  Black Lightning was DC Comics first Black superhero with his own comic book series.

Inspired by the 1986, two-issue DC comic book miniseries, History of the DC Universe, this new series examines the mythology of the DC Universe and its iconic moments of history via the lives of four African-American characters:  Black Lightning, Bumblebee/Karen Duncan & Herald/Guardian/Mal Duncan, and Anissa Pierce/Thunder (the daughter of Jefferson Pierce); one AAPI character – Katana/Tatsu Yamashiro; and one Latino character – Renee Montoya.  The Other History of the DC Universe depicts sociopolitical threads as seen through the prism of DC super heroes who come from traditionally disenfranchised groups.

The Other History of the DC Universe #1 offers the story of Jefferson Pierce, the man who becomes Black Lightning.  It is a journey that chronicles Pierce as he makes his way from being a young track star to a teacher and ultimately to his troubled life as the superhero, Black Lightning.

The Other History of the DC Universe #1 opens the day a young Black man named Jefferson Pierce learns that his father has been killed, a moment which changes his life.  Pierce goes on to win the gold medal at the 1972 Olympic Games.  He later becomes a teacher, but his life changes again when his in-born ability to manipulate and generate electricity suddenly emerges.

He eventually uses those powers to become the superhero, Black Lightning, but he discovers that he really does not fit in with the other superheroes of the time, such as the Justice League of America.  He even finds himself estranged from other Black superheroes, such as the Green Lantern also known as John Stewart.  And Black Lightning's struggles may destroy everything that he has as Jefferson Pierce.

THE LOWDOWN:  I am a fan of the television and film work of screenwriter John Ridley, but I have never read any of the comic books that he has written over the last two decades.  However, I have been looking forward to The Other History of the DC Universe since it was first announced a few years ago.  I must say that after reading “Book One,” it is not what I expected.

In a way, The Other History of the DC Universe #1 takes a view of superheroes the way the late Marvel Comics legend, Stan Lee, did.  Superheroes have “feet of clay,” and Lee often depicted his superheroes as having problems that originated in their civilian lives, sometimes coming forward before they gained powers.  For instance, there is the bullied, teen wallflower, Peter Parker, who became Spider-Man.

Ridley depicts Black Lightning as a superhero who wears a mask to hide his identity as Jefferson Pierce from the enemies he faces as a superhero.  However, Black Lightning is one of many masks that Pierce wears to hide his secrets – personal and professional – from everyone in his life.  His professional life includes everything that Pierce does, from being a teacher and mentor to being a superhero and a vigilante.  As his powers are now depicted as being inborn, Pierce seems more like a Marvel persecuted mutant than a shiny DC Comics superhero, and his life is a series of struggles, regardless of the roles he plays.  Normally, I would like that, but if I'm honest, I will admit that I wanted this alternate history to offer more superhero action than Black male angst.

I read The Other History of the DC Universe #1 as being about the trials and tribulations of a Black man living in a tumultuous time period that runs from 1972 to 1995.  If this comic book can be said to have a central point or theme, it is that maybe Black/African-American men put too much pressure on themselves, perhaps even more than the larger American society does.

The Other History of the DC Universe #1 is one of those comic books that tells its story via illustrations and text in caption boxes; there are no word balloons/bubbles.  In that regard, the art team of Giuseppe Camuncoli and Andrea Cucchi delivers competent if not spectacular artwork, but the problem is that most of that art seems like nothing more than spot illustrations for prose.  I can't really call this comic book art “graphical storytelling,” because it isn't so much story as it is merely complementary to text that works like prose.  Luckily, this art is colored by one of the very best comic book colorists of the last 25 years, the great José Villarrubia.  Also, I think Steve Wands' lettering gives this first issue a much needed spark.

I am considering reading the rest of The Other History of the DC Universe, but it isn't a priority.  Still, part of me is curious about how John Ridley will present the stories of these other non-white characters.

I READS YOU RECOMMENDS:  Fans of Black superheros will want to try The Other History of the DC Universe.

Posted by Leroy Douresseaux at 2:29 PM