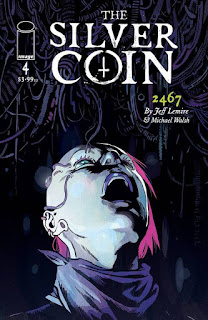 The Silver Coin is a horror comic book anthology and miniseries published by Image Comics.  It is the creation of artist Michael Walsh and writers Ed Brisson, Jeff Lemire, Kelly Thompson, and Chip Zdarsky.  Each issue of this five-issue miniseries tells a tale of terror that is set in a supernatural world in which the mysterious “Silver Coin” changes the lives of those who take possession of it.  The fourth issue is written by Jeff Lemire; drawn and lettered by Michael Walsh; and colored by Walsh and Toni Marie Griffin.

The Silver Coin #4 (entitled “2467”) opens in the year 2467.  The new metropolis of this new world has buried the old world beneath its junk and refuse.  A trio of scavengers are on the run from Officer Colten Dudley and his remote controlled drone (called a “bird”).  But one of these scavengers is going to discover an ancient treasure.  The price it carries is unimaginable, and everyone may end up paying that price.

THE LOWDOWN:  As I wrote in my reviews of the first three issues of The Silver Coin, I am a big fan of horror comic book anthologies.  That includes everything from the classic EC Comics titles to later titles like DC Comics' Ghosts and House of Mystery, Kitchen Sink Press's Death Rattle, and Approbation Comics' Amour, to name a few.

“2467,” the offering in The Silver Coin #4, surpasses the stories offered in issues #2 and #3.  Jeff Lemire, who has written some outstanding science fiction comics, including Sweet Tooth, offers a tale that shows that the past isn't always history – a thing long gone – even if we have forgotten that past.

Once again, Michael Walsh's art and graphical storytelling are what really delivers the unsettling moments in this tale.  The “worms” which the citizens of this world use to connect to each other as if each person were a device, are both nasty and chilling.  I think the world of “2467” is worth some expansion.  Dear readers, let's come back for the finale and see what's in store.