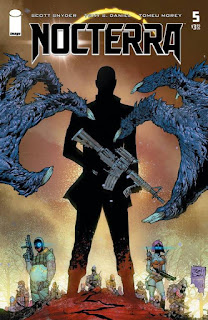 Nocterra is a horror and science fiction comic book series from writer Scott Snyder and artist Tony S. Daniel.  Published by Image Comics, Nocterra is set on an Earth that has been experiencing an everlasting night, the “Big PM,” since the sky went dark and the world was plunged into an everlasting night over a decade ago.  Colorist Tomeu Morey and letterer Andworld Design complete the series' creative team.

Valentina “Val” Riggs – call sign “Sundog,” – was in the fifth grade the day the “Big PM” occurred.  Thirteen years later (“13 PM”), Val drives a big rig hauler, a heavily-illuminated 18-wheeler known as the “Sundog Convoy.”  A skilled “ferryman” Val transports people and goods along deadly unlit roads between the few remaining human outposts, and now she has her most dangerous haul – Bailey, a girl with a dangerous secret and her brother, Emory “Em” Riggs, who is becoming a Shade.

As Nocterra #5 opens, Val remembers those early days of sanctuary, when there was hope to reverse her parents' transformations into “Smudges,” the name for a human Shade.  Now, Val has found safety in the mysterious Sanctuary, having brought Bailey to the her grandfather's brother, Tiberius McCray, the leader of Sanctuary.

Sanctuary is also the place where Val found that mysterious light, “the Lux,” that can reverse Em's transformation into a Smudge.  Now, Val has two choices:  keep herself and Em safe or take Sanctuary for granted and leave.  Val is leaning towards that latter, but is there truth and darkness even in this great light?

THE LOWDOWN:  As I have written in some of my earlier reviews of Nocterra, I enjoy writer Scott Snyder's creator-owned series.  I have also told you, dear readers, that I am usually happy to read a comic book drawn by Tony S. Daniel, going back to his early days writing and drawing creator-owned titles at Image, such as The Tenth.  Nocterra has justified my devotion, and this penultimate issue, #5, of the series' first story arc has made me determined to follow Nocterra's dark highways and byways wherever they might lead.

As a theme in Nocterra #5, Snyder presents the idea that nothing, even sanctuary, is enough for humans.  They will take the bad that is the best for which they can hope and do worse trying to get better instead – even if that will obviously lead to disaster.  Andworld Design's lettering pounds the reads with this issue's ominous mood and dark misgivings about humanity.

Daniels eschews kinetic action for two-fisted conspiratorial drama that carries readers to this issue's shocking cliffhanger.  Tomeu Morey's beautiful colors advances an array of moods and emotions, conveying darkness even in the blinding light of Lux.  So, dear readers, there is time to catch up before this debut story arc ends.

I READS YOU RECOMMENDS:  Fans of Scott Snyder and Tony S. Daniel will want to sample Nocterra.

[This comic book includes a preview of Ordinary Gods #1 by Kyle Higgins and Felipe Watanabe.]

Posted by Leroy Douresseaux at 2:25 PM