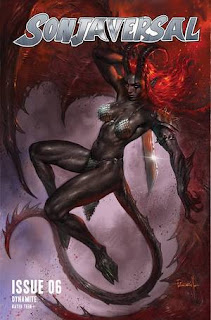 Red Sonja remained a fixture in comic books from then until about 1986.  In 2005, Dynamite Entertainment began publishing comic books featuring differing versions of the character.  One of those is a spin-off title, Sonjaversal, which sees Red Sonja battle other versions of herself from different dimensions.  Sonjaversal is currently written by Christopher Hastings; drawn by Pasquale Qualano; colored by Kike J. Diaz; and lettered by Hassan Otsmane-Elhaou.

Sonjaversal #6 opens in Makkalet City, the stomping grounds of “Noir Sonja” a.k.a. “Sonja Noir.”  While relaxing in a local watering hole, she overhears some surprising news.  A low level street hood, Pickles Zingara, the dumbest mobster in the 'Z' Syndicate, is back in town.  But how could that be?  Sonja killed him.

Complicating things even more, Sonja owes rent money – a lot of rent money – to Mr. Khatt, and she has until the next morning to pay him his rent or pay with her life.  Just when things can't get worse, Sonja receives unwanted visits from a demon who appears to her in reflective surfaces.  So what the heck does “Hell Sonja” want?

THE LOWDOWN:   Dynamite Entertainment's marketing department recently began providing me with PDF review copies of some of their titles.  One of them is Sonjaversal #6, which is the first issue of the title that I have read.  I have seen listings for it, but did not pay attention.

That's a shame because I really enjoyed Sonjaversal #6, with its comic spin on hard-boiled detective fiction.  I never imagined that someone could pull off a film noir/sword and sorcery mix, but writer Christopher Hastings does.  In Sonjaversal #6, the opening chapter of the series' second story arc, Hastings offers enough tasty bits to make me want to come back for more.

The art team of illustrator Pasquale Qualano and colorist Kike J. Diaz is inconsistent; sometimes they are good, and other times the storytelling is confusing.  Still, they get us where Hastings wants us to go.  Luckily, Hassan Otsmane-Elhaou offers solid lettering that conveys the story even in the confusing moments of the art.  And Sonjaversal #6 is a nice jumping-on point for new readers.

Posted by Leroy Douresseaux at 3:27 PM