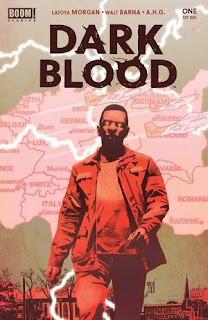 Dark Blood is a new six-issue comic book miniseries created and written by screenwriter LaToya Morgan (AMC’s "The Walking Dead," "Into The Badlands").  Published by BOOM! Studios, the series is drawn by Walt Barna; colored by A.H.G.; and lettered by Andworld Design.  The series focuses on an Black World War II veteran who discovers that he has strange new abilities.

Dark Blood #1 opens in Alabama, 1955.  It's night.  Avery Aldridge, also known as “Double A,” is leaving his job at the diner, “Hardy's Eats.”  In the alley, he has a fateful encounter with a racist.  Double A is a highly decorated World War II soldier, a former fighter pilot, a member of the soon-to-be-legendary “Red Tails.”  He is expected to act like a boy … when he is actually a very powerful, grown-ass man.  But this is “The Night of the Variance,” and everything is going to start to change – even the things some don't want changed.

THE LOWDOWN:  As I much as I love the original Star Wars movies and a number of classic Walt Disney animated features (Peter Pan), my all-time favorite movie moment occurs in 1967's In the Heat of the Night.  Involuntarily assigned to a homicide case in Sparta Mississippi, Philadelphia police detective Virgil Tibbs (played by Sidney Poitier) is interviewing a suspect, a local and powerful rich white man named Endicott (Larry Gates), when Endicott slaps him in the face.  Tibbs slaps him right back.  The first time I saw Tibbs slap Endicott, it took my breath away … and it still does.

Television writer-producer LaToya Morgan (AMC's "TURN: Washington's Spies") offers a sci-fi/horror spin on Tibbs' slap as the spine of the first issue of her new comic book, Dark Blood.  This time, the confrontation is longer, and Avery Aldridge's response is made a bit more complicated, partly because he seems unstuck in time.  Morgan does everything to tell her readers a lot by whetting their appetites for more, because they don't know the half of it, and she makes that “it” intriguing.

For all that I am intrigued by Dark Blood #1's story and concept, this first issue is also a showcase for the art team of illustrator Walt Barna and colorist A.H.G.  Barna's compositions are some of the most convincing period art that I have seen in a modern comic book in years.  Barna's Alabama, 1955 looks so “old-timey” that I could believe that it is something Barna drew at least half-a-century ago.  Barna's aerial sequences depicting Aldridge's time as a Red Tail reminds me of the comic book art one might find in EC Comics' legendary war comic book, Aces High (1955).

A.H.G.'s colors are gorgeous and also from a time machine.  If I didn't know better, I would say he hand-colored this comic book and manually separated those colors in a back office at a NYC-based comic book publisher – in days gone by.  Seriously, his colors shimmer, but are also earthy, and they make the storytelling's time periods look and feel authentic.

And I always enjoy Andworld Design's lettering, which is always stylish in a way that brings immediacy and power to the drama.  So LaToya Morgan, Walt Barna, A.H.G., and Andworld Design are off to a most excellent start, and Dark Blood #1 sparkles with promise.