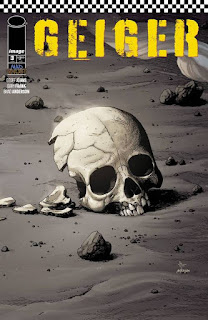 As Geiger #3 (“Fallout”) opens, a flashback reveals Tariq's past life when he began his fight against cancer.  Back in the present, Tariq, now known as “Geiger,” has saved two siblings, Hailee and Henry, from Nightcrawlers.  What will he do with these kids … when all he wants to be is alone?

Meanwhile, another flashback reveals Geiger's first encounter with the young King of Camelot and his Knights.  With this King spoiling for revenge, Geiger may have to take a serious look at whatever these two children's plans are.

THE LOWDOWN:  As first issues go, Geiger #1 was mostly an introduction, kind of like a prologue.  It introduced the title character, Geiger, giving readers a look at who he was in the past and a glance at who he is now.  Geiger #2 went inside Las Vegas.

With Geiger #3, Geoff Johns begins to excavate the heart of the character drama and the passion of old grudges and conflicts.  It feels like the third issue is the first one with some real emotion in the story.

In this third issue, Gary Frank's pencil art captures the emotions, passions, and hotter blood of the relationships of the past that shape the present of Geiger's narrative.  Frank conveys the evil and petulance of the fake boy king in a way that strikes out at the reader, while he reveals Tariq/Geiger in layers that finally opens up the character to readers.  Brad Anderson's colors, however, keeps this “revealing” from dispelling the mystery by painting color and shadow in equal measure.

[This comic book includes a preview of Ordinary Gods #1 by Kyle Higgins and Felipe Watanabe.]

Posted by Leroy Douresseaux at 3:25 PM