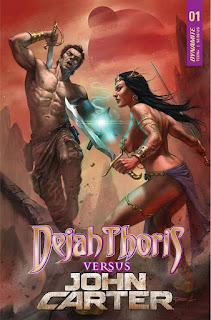 Dejah was the title character of A Princess of Mars, the princess of the Martian city-state/empire of Helium.  John Carter was a Confederate veteran of the American Civil War who was transported to Mars via “astral projection” where he got a new body that was similar to the one he left behind on Earth.  John makes several trips back and forth between Earth and Barsoom, and Dejah and John were married and had two children.

John Carter first appeared in comic books in the early 1950s, and Dejah has been a prominent comic book character beginning in 2010 via Dynamite Entertainment.  Now, the star-crossed lovers are the stars of Dynamite's new comic book, Dejah Thoris Versus John Carter.  The series is written by Dan Abnett; drawn by Alessandro Miracolo; colored by Dearbhla Kelly; and lettered by Simon Bowland.  The series finds Dejah and John caught in a war to save Mars from an ancient race that has returned to reclaim Mars.

As Dejah Thoris Versus John Carter #1 opens, Dejah Thoris reigns as Queen of Helium, after overturning the regime of the tyrant, Kurz Kurtos.  Now, she must deal with his ally, the rogue scientist, Rotak Gall.  Dejah and her forces travel to Dar Shadeth, far in the distant west.  However, before she faces Gall, she must face the beasts of “The Longborn,” the ancient and mysterious race of immortal gods that have arrived to reclaim Barsoom/Mars.

Meanwhile, John Carter worries about the status of his relationship with Dejah, after having betrayed her during her war with Kurtos.  John was in the thrall of the Witch-Queen, and he believes that means he is a liability.  Will Baroom's (former) greatest champion remain or return to Earth?

THE LOWDOWN:  Dynamite Entertainment's marketing department recently began providing me with PDF review copies of some of their titles.  One of them is Dejah Thoris Versus John Carter #1.  I must admit that other than being aware of Edgar Rice Burrough's “Martian Series” or “Barsoom series,” my only substantial experience with these stories is the 2012 Disney film, John Carter.

I find Dejah Thoris Versus John Carter #1 likable, and the art by Alessandro Miracolo reminds me of the kind of art that readers would find in a Flash Gordon comic book.  Through her colors, Dearbhla Kelly creates the idea that the story takes place on a different planet simply by making the atmosphere and lighting look like they are part of an alien biosphere.  Simon Bowland's lettering catches the eccentric and shifting nature of the dialogue and calmly presents it to readers.

Writer Dan Abnett, a veteran comic book scribe, delivers a script filled with modern comic book storytelling elements and plot points.  There is a mission, Dejah's, that builds on mystery before delivering a cliffhanger.  Meanwhile, there is the appropriate soap opera drama focusing on John Carter's shame and self-doubt.  Abnett also makes me want to come back for the second issue, so I'll recommend Dejah Thoris Versus John Carter #1.  The series does have potential.

Posted by Leroy Douresseaux at 2:45 PM