Comics Review: "SPAWN'S UNIVERSE #1" Has Something for Every Hellspawn Acolyte 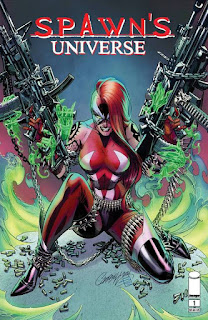 Back in February (2021), Todd McFarlane announced his plans to build a larger, multi-character, interconnected, comic book universe based around his Spawn comic book – a “Spawn Universe.”  McFarlane also announced four new comic book titles coming out in 2021, with three of them continuing as regular monthly titles.  The three monthly “Spawn Universe” titles are going to be King Spawn, Gunslinger Spawn, and The Scorched (a team book featuring a rotating cast of characters, apparently mostly Hellspawn characters such as Medieval Spawn and She-Spawn).  The first release of the four new titles is Spawn Universe #1, which sets the stage with the story that will lead to the new monthly titles.

Spawn Universe #1 opens in the aftermath of Spawn's battle with Omega Spawn, but the servants of Omega still have work to do, as in target Cogliostro.  Meanwhile, Spawn continues his quest to close “Dead Zones,” and the angels and demons that used them to come to Earth.  Now, Spawn must return to the site of his battle with Omega, but this time, he is taking Cy-Gor with him.  Will that be enough to stop “Disruptor?”

THE LOWDOWN:  Concerning the main /lead story in Spawn's Universe #1, I can say that Todd McFarlane's writing is still what it was 30 years ago – mediocre.  On the other hand, there is a short segment focusing on a barge crewman that is poignant and powerfully dramatic.  Jim Cheung's pencil art is freaking awesome; I could read a 100 pages of mediocre comics if he were the artist drawing them.  I think McFarlane inks Cheung's pencils, but whoever did it did a superb job.  The coloring also contributes to the general illustrative awesomeness of the first story.

“Medieval”
Medieval Spawn is hunting the “Hieratic Mages” when he runs into a powerful wizard, Tyrus, and his mighty dragon.  So what does Cogliostro have to do with this, and why is a present day human, Marc Rosen, dreaming about this?  “Medieval” has some beautiful fantasy battle art by Stephen Segovia.  The story, such as it is (more of a vignette), is good, but the art is what tells its so awesomely.

“She-Spawn”
If she is going to be the “She-Spawn,” Jessica Priest has to say goodbye to her mother and to her five-year-old daughter, Annie, who believes that Jessica is her aunt.  The verdict is that this segment is poignant, and it certainly establishes why She-Spawn is going to be seething mad.

“Gunslinger”
They knew he would come back from the dead – even if it took a year.  Now, Gunslinger Spawn is ready to do some killing.  The verdict is that Brett Booth's art for “Gunslinger,” is really good and resembles the work of comic book writer-artist Tim Truman.  That is appropriate for this weird Western-style tale.

Overall, I enjoyed Spawn's Universe #1.  This is the first Spawn or related title that I have enjoyed in ages.  It would be cool to have a second issue.

I READS YOU RECOMMENDS:  Fans of Spawn will want Spawn's Universe #1


Reviewed by Leroy Douresseaux a.k.a. "I Reads You"