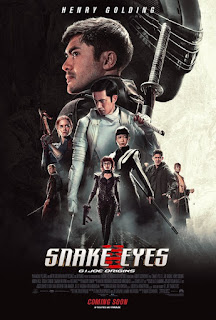 Snake Eyes: G.I. Joe Origins is a 2021 action and superhero fantasy film directed by Robert Schwentke.  It is the third film based on characters from Hasbro's G.I. Joe media franchise.  Snake Eyes is an origin story for the title character and a G.I. Joe spin off film.

Snake Eyes: G.I. Joe Origins opens in the past.  We meet a boy (Max Archibald) who watches a group of men kill his father (Steve Allerick).  The leader of the men uses a pair of dice to decide the father's fate, and the dice come up “snake eyes.”

Years later, the boy has become a mysterious lone underground fighter known only as “Snake Eyes” (Henry Golding).  He falls in with Kenta (Takehiro Hira), a gang leader and gun smuggler who says he can help him.  Kenta claims to know how to find the man who killed Snake Eyes' father, and Snake Eyes has spent years seeking revenge.  After he falls out with Kenta, Snake Eyes befriends Thomas “Tommy” Arashikage (Andrew Koji), the presumptive heir of the Arashikage ninja clan.  Tommy takes Snake Eyes to Japan and offers him a chance to join the clan – if he can past the “three tests.”

However, Snake Eyes finds his loyalties constantly being tested and his motives questioned, especially by Akiko (Haruka Abe), who is in charge of security at the Arashikage compound.  Snake Eyes will soon find that his secrets and lies have him caught between two competing covert organizations, the counter-terrorist G.I. Joe and the terrorist Cobra.

I am not a big fan of the G.I. Joe media franchise although I have read a few of the comic books published by both Marvel Comics (1982-1994) and IDW Publishing (2008-present).  I watched a few episodes of the syndicated animation television series that ran from 1983 to 1986.  I have even watched the two live-action G.I. Joe films, G.I. Joe: The Rise of Cobra (2009) and G.I. Joe: Retaliation (2013).  However, I have always been curious about the rival characters Snake Eyes (G.I. Joe) and Storm Shadow (Cobra).

I can keep this simple.  Snake Eyes is for G.I. Joe fans.  I'm not sure that even people who were or are causal fans of the earlier G.I. Joe films will like this.  The fight scenes are good, with a few (the car chase fight) being quite spectacular.  The character drama is junk, and even the opening section about the murder of Snake Eyes' father fails to really resonate the way the killing of a protagonist's parent should.  None of the characters' motivations and few conflicts seem genuine; everything seems contrived or, at least, badly written.  It does not help the drama that most of the acting is … let's say “average” to be nice.

Like the previous G.I. Joe films, I think Snake Eyes: G.I. Joe Origins will have a long life on cable television or however long cable TV has left as a viable medium (which is another story).  In fact, I like the fight scenes and actions enough to kind of like this movie.  I think that there is a great story to be told of the origin of Snake Eyes, but that great story just isn't in this movie.

Posted by Leroy Douresseaux at 5:02 AM