Comics Review: "POST AMERICANA #6" is a Wonder of Violence 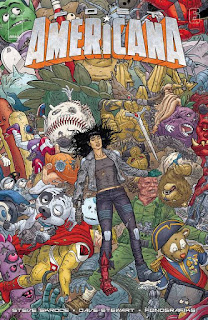 Post Americana is a seven-issue miniseries written and drawn by Steve Skroce and published by Image Comics.  Post Americana is set in a dystopian future and focuses on two rebels' attempts to save an area called the “Wasteland” from a rogue President of the United States.  Colorist Dave Stewart and letterer Fonografiks complete Post Americana's creative team.

Post Americana has two settings.  The first is “The Bubble,” an installation inside the Cheyenne Mountains that is the most sophisticated super-bunker in the world.  Inside, Nathaniel Hawksworthe, the new President of the United States, plans to use the bunker's resources to build the “New America” by basically paving over the second setting, the “Wasteland.”  Determined to stop Hawksworthe are Michael “Mike” Lee, a hapless rebel, and Carolyn, a deadly Wasteland girl, who is already hellbent on revenge against the denizens of the Bubble.  But Carolyn and Mike will have to survive the Wasteland in order to save the Wasteland.

As Post Americana #6 opens, Carolyn, Mike, and Evey face betrayal in the form of the wrath of Night Terror and his partner, Donny (a vicious werewolf).  On the lost coast of California, the trio found Wonder Studios (a Walt Disney-like studio), and thought that they had found a refuge.  Can Mister Floppibottoms and Eggbert save our heroes?

Meanwhile, things are starting to take a dark turn in the Bubble.  What shall we make of Hawksworthe's crazy story of his apparently crazier past?  The future hangs in the balance!

THE LOWDOWN:  As a reminder:  I am a huge fan of writer-artist Steve Skroce, going back over two decades.  All the while that I have been reviewing this series, I have regaled you, dear readers, with the joys of reading Post Americana.

Issue #5 seemed divorced from the rest of the narrative, but issue #6 brings it all back, connecting the Wonder Series subplot with a jarring turn in the story of the Bubble and its ruler.  Who knows what to expect of issue #7, but, in the meantime, Skroce delivers a high-octane, violent, action movie sixth issue.  As always his kinetic drawing style and bracing graphic storytelling is perfect for the ol' ultra-violence depicted here.

I can't wait for the seventh issue.