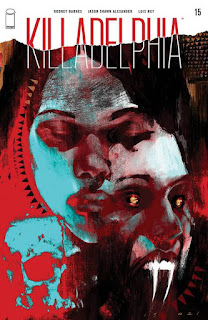 “Home is Where the Hatred Is” Part III: “Manifest Destiny”

As Killadelphia #15 (“Manifest Destiny”) opens, there is a new vampire player in town, and it's another “Founding Father” and former president.  Meet Tom Jefferson.  He has a tale to tell, philosophically, of course, and he is making a claim on the throne.

Elsewhere, Toppy and the rest of Abigail Adams' inner circle invade the Sangsters' sanctum.  Oh, they also want to know where See Saw has gone, but isn't that his body, all curled up on the floor?  Meanwhile, See Saw is meeting important religious figures like Jesus (who is Black), but he may have to go back to an original god to get the help and the answers he seeks.

THE LOWDOWN:  Killadelphia hits the midway point of its third story arc, “Home is Where the Hatred Is.”  After the pyrotechnics of the previous story arc, “Burn Baby Burn,” this new story line started with a focus on family – damned and otherwise, but now, its pyrotechnics begin.

I find myself endlessly fascinated by writer Rodney Barnes' plots, but sometimes, I really get a chance to admire how he drops history, religion, culture, politics, and philosophy, scattered like drops of enlightening blood throughout his scripts.  That he has brought Thomas Jefferson into play shows that Killadelphia is not growing cold, but will keep surprising and scaring us.

Artist Jason Shawn Alexander and colorist Luis Nct dance through Barnes' script bringing each scene or sequence into life with its own unique look.  From lurid to luminescent, Killadelphia is a comic book of different worlds and different textures and moods and not a place where things are from a melting pot...

Killadelphia #15 is a another great chapter, and you should be reading it, dear readers.

[Killadelphia #15 has a backup feature: “Elysium Gardens” Part 8 “The Power of One” by Rodney Barnes, Chris Mitten, Sherard Jackson, and Marshall Dillon]